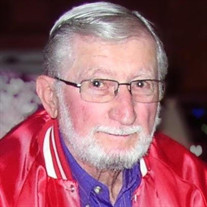 William “Bill” Odom, was born on December 17, 1937, in Lubbock Texas in the West Texas Hospital. His parents were W, C. and Lois Mitchell Odom. He departed this life on February 10, 2021, in Montgomery, Texas.Cremation services were provided by Sam Houston Funeral Home in Montgomery, Texas. Bill’s family lived in Lubbock and traveled from Lubbock to Childress to visit family on the train known as the “Doodlebug”. Most of his early years were spent in Alpena, Arkansas, where his family farmed. At the age of 10 the family moved from Arkansas to the Big Four Community north of Crosbyton to farm the family land. Bill attended Big Four school, a two room school. His teachers were Mr. and Mrs. Horne. When he finished 8th grade, he transferred to the Crosbyton ISD for the remaining 4 years.Bill was a Baptist and attended the First Baptist Church in Crosbyton. He became a Christian at the age of 17, and was baptisized on January 17, 1955. Bill had a beautiful voice and loved to sing. He sang in the choir at school and also sang in the churches he attended. One of his favorite hymns was “When he Roll is called up Yonder” He graduated from Crosbyton High School in 1956. He worked on the family farm and also worked for Wilson Bell Lumber in Crosbyton. He worked in the fall in the West Texas Gin. He met his school sweetheart, Bettye, when they were students at Crosbyton HIgh School. They dated for several years and were married on Feb. 8, 1957 at the family home in Big Four Community. Bill started working for Hudman Hardware and Furniture in 1958, and during this time his first son, Mark Olen, was born. Bill went to work for Farmers Supply in Lubbock Texas in 1959, and his family moved to Lubbock, Texas in 1959. In April, 1962, a second son, Bruce Mitchell was born.While living in Lubbock, Bill and Bettye attended Mackenzie Terrace Baptist Church, where he taught Sunday School. Bill opened an automotive repair shop in Crosbyton and named it Circle B Automotive in 1966 and the family moved back to Crosbyton. Bill had the heart to help wherever he could. He was a member of the Lions Club in Crosbyton. He joined the Crosbyton Volunteer Fire Departmentin 1966 and served it for a total of 30 years. He worked with Crosbyton Little League baseball and was the coach for the Mets. He also served as an umpire for Girl’s softball and Little League. He was an officer in the Crosbyton Booster Club and filmed all football games for many years. Bill was an advocate for the Crosbyton Livestock show and was named “Volunteer of the Year” in 2000. Bill was successful in his bid for Crosby County Commissioner in 1995 and served in that capacity for 8 years. While on the commissioners court, he was in charge of the 911 addressing for Crosby County and served on various boards for he county. He also had a landscaping business and farmed for a few years. He was named “Crosbyton’s Man of the Year” in 2002. Bill worked for the Crosbyton EMS and made many trips to Lubbock transporting patients. He worked as an advocate for Education for the Crosbyton Schools and served on the Crosbyton Cemetery Association Board of Directors for a number of years. He led the Association through the sprinkler system irrigation project in the cemetery. In 2002, he went to work at the Pioneer Memorial Museum as the manager. He resigned from the position in 2004.Bill was a member of the Crosby County Historical Commission and was the chairman of the historical marker committee.He was involved with Crosbyton’s Trade Days and the Courthouse Restoration project. Bill worked tirelessly on the Crosby County Courthouse 100 Birthday celebration in 2014. He was very involved with the “Big Four School” historical marker, and the “Battle of Blanco Canyon” marker projects. In 2016 Bill and Bettye embarked on a new outdoor adventure in their lives.when they went to work for Texas Parks and Wildlife Department, serving as Park Hosts. They served at Lake Livingston State Park, Martin Dies Jr. State Park and Huntsville State Park . He and Bettye retired from this adventure in 2021, due to his health. Bill is survived by his wife of 64 years, Bettye, his son Mark and wife Tressie of Montgomery, Bruce and wife, Traci, of Lubbock. One sister, Ann Beaty of Santa Anna, Texas. Grandchildren: Meredith and Michael Egan of Azle, Devin Odom of Plano, Avery Odom and Cameron Duvall of Carrollton ,Emily Odom of Turlock, CA, Will Odom of Culver City, CA. He is survived by sister and brother in laws, Joyce and Joe Hargrove, and Debbie and Mike Henegar. Several nieces and nephews, and a large extended family. One of his granddaughters, Avery, is expecting his first great granddaughter in July. Bill will be missed by those who loved him and worked with him through the years. Bill saw this poem several years ago, and said it was how he felt. “When I come to the end of my journey, and travel my last weary mile, just forget if you can the frown and remember only the smile. Forget that I’ve stumbled, and sometimes fell by the way. Do not grieve for my going, I would not have you be sad for one day. At the end of the day, stand beside me at my final resting place and remember only the best”.

William &#8220;Bill&#8221; Odom, was born on December 17, 1937, in Lubbock Texas in the West Texas Hospital. His parents were W, C. and Lois Mitchell Odom. He departed this life on February 10, 2021, in Montgomery, Texas.Cremation services were... View Obituary & Service Information

The family of William "Bill" Odom created this Life Tributes page to make it easy to share your memories.

Send flowers to the Odom family.