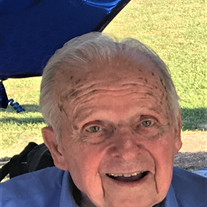 William Ben Blalock, Jr. went to be with his Lord and Savior while surrounded by loved ones on Saturday, August 14, 2021. Born April 7, 1926 to William Ben Blalock and Minnie Sue (Robbins) Blalock, he graduated from Huntsville High School and continued his education at Sam Houston State University. A veteran of WWII, Ben served in the U.S. Navy building radar systems. For many years he owned and operated Huntsville Building and Materials Company and was instrumental in helping many Huntsville residents buy their first homes. At the time of his death, Ben was the oldest living mayor of Huntsville. Ben was an active council member of Ward 1 and was later elected Mayor on September 28, 1968. As mayor, Ben was very involved in improving the Huntsville community and was very proud of the establishment of the Huntsville-Walker County Youth Association, the 4-H recreational facilities, the Community Day Care Center, and Little League Basketball which later became the Little Dribblers program. During his time as mayor, the Library Board and the Parks and Recreation Board were created in 1970 followed by the establishment of the Mayor's Commission on the Status of Women. After selling the Huntsville Building and Materials Company in the early 1970's, Ben moved to Waco where he was an outstanding salesman, receiving an award for exceeding the one-million-dollar sales mark for LL Sams (a church furniture and furnishings company). Ben was a lifelong, faithful Christian and was a member of the First Baptist Church of Huntsville. He supported many charitable Christian organizations. In his early adult years, Ben worked with children and later taught a men's Sunday School class. He was a long-time deacon during and received a Deacon Emeritus Award. Ben is preceded in death by his parents, first wife, Ruth Evelyn (Archer) Blalock (Riverside, TX), daughter Evie Ruth Darlan (Spring, TX), brother Dr. Raymond "Doc" Blalock and his wife Winona (Huntsville, TX), and grandson-in-law, Gary Lee Collins (Rock Springs, WY), and his second wife, Bonnie Ruth (Baker) Thorne-Blalock (Huntsville, TX). He is survived by his son William Ben Blalock III (Laramie, WY), granddaughters Bonnie Collins (Rock Springs, WY), and Courtney Blalock Wagner and her husband Jake (Denver, Colorado), son-in-law Michael Darlan (Conroe, TX), grandson Michael Chad Darlan, wife Krista, and great-grandson Conner (Spring, TX), sister Joyce Blalock (Santa Fe, NM), nephews, nieces, and cousins. Visitation will be held at the First Baptist Church of Huntsville, 1229 Avenue J, Huntsville, TX 77340 on Wednesday, August 25, 2021 at 9:30 am, with services following at 10:00 am. Burial service to be held at Adickes Addition of Oakwood Cemetery afterwards. In lieu of flowers, donations can be made to First Baptist Church of Huntsville, https://fbchuntsville.org. Memorial condolences to the family may be made at www.shmfh.com.

William Ben Blalock, Jr. went to be with his Lord and Savior while surrounded by loved ones on Saturday, August 14, 2021. Born April 7, 1926 to William Ben Blalock and Minnie Sue (Robbins) Blalock, he graduated from Huntsville High School and... View Obituary & Service Information

The family of William Ben Blalock, Jr. created this Life Tributes page to make it easy to share your memories.

William Ben Blalock, Jr. went to be with his Lord and Savior...

Send flowers to the Blalock family.