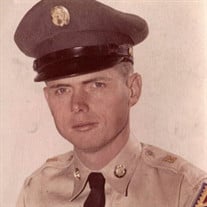 Vernon “Mac” Patrick McPherson passed away at home surrounded by his loved ones on September 10, 2020, in Huntsville, Texas. He was born June 16, 1938, in Ventura, California. He was the son of Donald and Ruth McPherson. Mac grew up in Palmdale, California. At 17 years old he joined the U.S. Army and began a life of travel and adventure. He served in Korea and did two tours of duty in the Vietnam war, where he met the love of his life Thi Chi “Angel” McPherson. His years in the service took him to several countries in Europe, as well as many military installations across the U.S. He was a proud alumni of the 1st Calvary Division Association. After 20 years of service, he retired from the U.S. Army. He then began a career as a correctional officer with TDCJ and retired again after 25 years. In full-time retirement, Mac could devote all his time to his family and his hobbies. Restoring classic cars was a lifelong passion for Mac. He had a large collection of cars and would spend his days fixing one and tearing down another. What made Mac the happiest was spending time with his family. He could often be found riding his tractor or under the hood of a car with one of his daughters or grandchildren in tow. Mac was known for his witty sense of humor and his racy jokes. Making someone laugh, whether a lifelong friend or a random stranger, gave Mac joy. Even in sickness, Mac always tried to comfort others with his humorous charm. He was preceded in death by his parents and his brother Herbert McPherson. He is survived by his wife of 51 years, Angel McPherson; four daughters, Lucy DeLoney of Las Vegas, NV; Dyanna Melloh and husband Eric, of Middleton, RI; Audrey McPherson of Dallas TX; Crystol Shirley and husband Jason, of College Station, TX; 7 grandchildren, Britnee Strickland, Collin and Cash Melloh, Jalen and Heaven DeLoney; and Crislyn and Ashlyn Shirley; and one brother, David McPherson. A visitation will be held on Wednesday, September 16, 2020 from 5:00 – 7:00pm at Sam Houston Memorial Funeral Home in Huntsville, Texas. A funeral service will be held on Thursday, September 17, 2020 at 10:00 am at the funeral home as well and then a graveside service will be held at Houston National Cemetery that afternoon. Memorial condolences to the family may be made at www.shmfh.com.

Vernon &#8220;Mac&#8221; Patrick McPherson passed away at home surrounded by his loved ones on September 10, 2020, in Huntsville, Texas. He was born June 16, 1938, in Ventura, California. He was the son of Donald and Ruth McPherson. Mac grew... View Obituary & Service Information

The family of Vernon Patrick McPherson created this Life Tributes page to make it easy to share your memories.

Send flowers to the McPherson family.