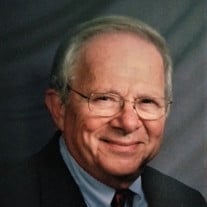 Stephen Jay Yeretsky was born in Chicago, IL on November 6, 1937. He died on July 24, 2021, in Houston, TX after a serious stroke. Steve is survived by his wife, Lynn Yeretsky and their three children: son, Michael and his wife Myra and children Cecilia, Andrew, Philip, and Hayley; daughter Kathi and husband Fred and children Stephen, Charlotte, Josephine, Claire, Frances, Raphael, Peter, Anthony and Emma; and son Ray; sister Nancy Armstrong; brother James Yeretsky; and numerous nieces and nephews. Steve is preceded in death by his parents Sylvia and Norman Yeretsky, son David Patrick, and grandsons Joseph Michael, Marion, and Paul. Steve graduated from Hinsdale Township High School outside of Chicago. He received a Bachelor of Science in Chemical Engineering from MIT in 1958. Following four years in the Navy, he worked for Standard Magnesium in Tulsa and Keiser Chemical in California until he began his Masters in Chemical Engineering at U. of Tulsa. He met his wife Lynn and they married January 16, 1964. He worked for Monsanto Chemical Co. outside Alvin, Tx for 35 years, living 6 years in England until 1981. He returned to work at the Chocolate Bayou plant until he retired on 01/01/2001. Steve had numerous consulting jobs as project manager for the next 20 years. Steve was a private pilot and was in the process of building a 4-place airplane, often helped by fellow pilots and family members. He fervently served on the Archdiocesan council of Galveston-Houston for 25 years, leading pastoral council discernments for many parishes in the diocese. Steve shared his life and virtue with everyone he knew and applied it to all that he did. Steve loved flying, Dixieland jazz, Astros baseball, astronomy, and was a WWII Naval history enthusiast. He had a strong devotion to Eucharistic Adoration and to St. Joseph. His warmth, sincere interest in others, his ready enthusiasm and his loyalty won him many life-long friends. His 13 grandchildren and many "adopted" grandchildren all called him 'Pops'. To Steve, this was the foundation of what was a fulfilling and beautiful life. He had much to give and asked for little. Steve was healthy and active, building his airplane, keeping up his many interests and friendships until his stroke on July 8, from which he sadly never recovered. He will be missed beyond expression; he has always been the strength and peaceful bedrock for our family. We are grateful for the years of love and guidance, and the wonderful example that he gave us. A rosary will be held at St. Joseph Catholic Church in New Waverly, TX on Friday, July 30, 2021 at 6:30pm. There will be a mass on Saturday, July 31, 2021 at 10:00am at Mary Queen Catholic Church, 606 Cedarwood Dr, Friendswood, TX 77546. Interment will follow at Mt. Olivet Catholic Cemetery, 7801 Gulf Fwy, Dickinson, TX 77539. A reception will follow the committal service at The Dunnes home, 15715 Clearcrest Dr., Houston, TX 77059. Memorial condolences to the family may be made at www.shmfh.com. In lieu of flowers, please make a donation to https://www.featherock.net/#Donate. https://www.tributeslides.com/tributes/show/M9T5CYFQ4P5M2MQ3

Stephen Jay Yeretsky was born in Chicago, IL on November 6, 1937. He died on July 24, 2021, in Houston, TX after a serious stroke. Steve is survived by his wife, Lynn Yeretsky and their three children: son, Michael and his wife Myra and children... View Obituary & Service Information

The family of Stephen Jay Yeretsky created this Life Tributes page to make it easy to share your memories.

Send flowers to the Yeretsky family.