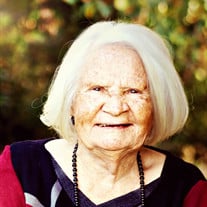 On July 31, 2021 Sadie Mae Atkins McMahon went to be with her Lord and Savior at the age of 91 with her family by her side. Sadie was born January 26, 1930 in Des Arc, Arkansas to Jim & Mary Britt Atkins. She grew up in Des Arc, AR on a share cropping farm. She spent her childhood chopping and picking cotton as well as helping raise her eleven siblings. Sadie was the oldest girl of the twelve children. Sadie loved children and gave birth to her pride and joy Ray Elton Twardeski in the Spring of 1946. Shortly after she had Ray Sadie left Arkansas to start a career. She was an adventurer and found work in many different industries but ultimately put roots down at Thatcher Glass in Elmira, New York and retired after twenty-five years. During her time in New York, Sadie met the love of her life Joseph McMahon who she referred to as," "My Joe." Joe and Sadie spent much of their time after retirement with their grandchildren. The grandkids would often spend their summers in New York with them making memories. Pat Burt one of Sadie's dear sisters also lived in New York and Sadie spent much of her time with her and her nieces. After the passing of her husband Joseph, Sadie relocated to Texas to live near her son, daughter in-love, and grandkids, later great grandkids & great-great grandkids. While Sadie was often referred to as "Sis" in her younger years she is famously know by all her grandkids as "Gg." Gg was full of life she wasn't scared of a thing. Her laugh was contagious, and her smile could light up a room. Up until her passing you could find her on the ground reading a book to one of the babies or pushing cars around the living room or even playing baseball outside with them. When she was not busy with the family, she passed the time sitting in her rocking chair on the porch. She was always up for a ride out to get ice cream & after 5pm each day you could find her at her kitchen table playing a game of rummy with her beloved son Raybo. Sadie is survived by her son Ray, (Raybo) Twardeski, granddaughters Shelly Beaird and Monica Twardeski, grandsons Robert Twardeski, Rodney Twardeski, and Lee Beaird of Huntsville, Texas; great grandchildren, Shelby Beaird, Curtis Twardeski of Huntsville, Riley Twardeski, Coby Twardeski of Finksburg, Maryland, Timothy Watson, and Trevor Ray Twardeski of Huntsville; great great grandchildren, Wyatt Janes and Sadie Janes of Huntsville. Sister Cari Bradshaw, brother Clifford Atkins, twin sisters Patricia Burt and Barbara White, and sister Bertie Fortner all of Arkansas; and numerous nieces, nephews, and friends. She preceded in death by her parents Jim Atkins and Mary Bell Francis Britt Atkins her husband Joseph McMahon, daughter-in-love Judy Harper Twardeski, brother-in-law Judd Burt, brother Calvin Atkins, brother Robert Atkins, brother Walter Atkins, brother Ray Atkins, brother Johnny Atkins, and baby sister Atkins. A visitation will be held on Wednesday, August 4, 2021 from 5:00 to 7:00 pm at Sam Houston Memorial Funeral Home in Huntsville, TX. Services will be Thursday, August 5 at First Assembly of God Church in Huntsville at 11:00 am. Interment will follow at Black Jack Cemetery. Memorial condolences to the family may be made at www.shmfh.com. Gg will be carried to her final resting place by her great grandsons, Curtis Twardeski, Riley Twardeski, Coby Twardeski, Timothy Watson and Trevor Twardeski.

On July 31, 2021 Sadie Mae Atkins McMahon went to be with her Lord and Savior at the age of 91 with her family by her side. Sadie was born January 26, 1930 in Des Arc, Arkansas to Jim & Mary Britt Atkins. She grew up in Des Arc, AR on a share... View Obituary & Service Information

The family of Sadie M McMahon created this Life Tributes page to make it easy to share your memories.

Send flowers to the McMahon family.