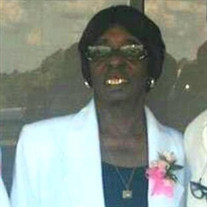 On November 11, 1945 Charlie and Lucy Mae Williams were blessed with a beautiful gem, Ruby Jewel. As a child Ruby learned the importance of having fun. She went to all extremes to encourage others and get a laugh out of them. She coined the phrase "gwone" for go on you can do it. She attended kindergarten in the Phelps community school and furthered her education in Huntsville school system and attended Sam Houston High School, where she was a loyal supporter of the "fighting tigers". Outside of loving her family and friends next was sports and fishing. An original Houston Astros, Houston Oilers and Houston Rockets fan. She joined the church at an early age and believed that If God can't fix it nobody can. She was a lifelong member of Warren Chapel United Methodist Church. A behind the scenes person, she helped a lot of people. She could feel other's pain. A mother, grandmother, great grandmother about to be a great, great grandmother, aunt, sister, short order cook, babysitter, caregiver, friend, church treasurer, neighbor are all titles she could wear but most of all she was a loving kind friendly shining star who brought much joy to many. Her work here is done. She leaves to cherish her memories 3 sons; Percy Donnell Williams, Jerry Wayne Williams, and Arthur Lee Kizzee, 4 grandchildren; Percy Brooks, Courtney Brooks, Wee Onnica Kizzee, and Wee Daysha Kizzee and 10 great­grandchildren. Also, her two brothers Charlie "Billy" Williams and Eddie Lee Williams (Billie) and two sisters Mary Moultry (Percy) and Esther Williams, as well as a host of nieces, nephews, other relatives and friends, along with her Judge Max Rogers family for over 20 years. Ruby will lie in state on Friday, October 2, 2020 from 8:00am to 5:00pm at Sam Houston Memorial Funeral Home in Huntsville, Texas and she will be laid to rest with a graveside service on Saturday, October 3, 2020 at Old Grant Colony Cemetery in Huntsville, Texas at 10:00am. Memorial condolences to the family may be made at www.shmfh.com.

On November 11, 1945 Charlie and Lucy Mae Williams were blessed with a beautiful gem, Ruby Jewel. As a child Ruby learned the importance of having fun. She went to all extremes to encourage others and get a laugh out of them. She coined the... View Obituary & Service Information

The family of Ruby Jewel Kizzee created this Life Tributes page to make it easy to share your memories.

Send flowers to the Kizzee family.