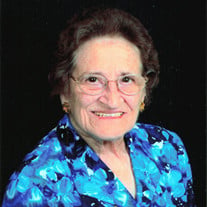 Ruby Zane Rivers Buck was born on August 31, 1933 and passed away May 10, 2022 at the age of 88. She was born in Jonesboro, TX and was the youngest of 4 girls. When she was 9 years old, her family moved to Houston, TX and found their forever home. She graduated from Jefferson Davis High School and after High School went to work for the Bank of the Southwest in downtown Houston. During this time, she attended Airline Drive Baptist Church and met the love of her life, Henry Elwin Buck. They married September 4, 1959 at Airline Baptist Church. After they married, they resided in Houston and had their first child. They had two more children and she got to live her dream of being a wife and mother. She helped many nieces and nephews through these years with the most beautiful servant heart (She loved every minute spent helping someone else). When her children got older, she decided to go back to work. She got a job at Sam Houston High School in the registrar's office and worked there for 14 years. She enjoyed these working years. Henry and Ruby retired in Willis, TX and attended first Baptist Church Willis. The focus of her life was her family and faith in Jesus Christ. In the 1970's and 1980's, Henry and Ruby worked as the Single's leaders at Memorial Baptist Church. These times of ministry would be some of the most rewarding times of service to her Lord. She touched many lives through her commitment to share the gospel of the Lord Jesus Christ. She had debilitating arthritis and lived with constant pain in the last years of her life. She often said, "Even though times have been hard, I can't complain because God gave me a life beyond amazing." She was an amazing example of Proverbs 31. She taught by example of how to be a strong woman of faith. Preceded in death by her parents, Jesse Arnold Rivers and Emma Lee Myers Rivers Husband - Henry Elwin Buck Sr. Sisters - Wanda Shirley, Rose Richey, and Celia Murphy She is survived by: Daughter - Janet Fincher & Husband Rusty Fincher Sons - Henry Buck Jr. & Wife Kim, as well as Warren Buck Grandchildren - Brian Fincher, John Fincher & wife Elizabeth, Julia Fincher, Rebekah Buck, Lauren Buck Numerous nieces, nephews, and cousins

Ruby Zane Rivers Buck was born on August 31, 1933 and passed away May 10, 2022 at the age of 88. She was born in Jonesboro, TX and was the youngest of 4 girls. When she was 9 years old, her family moved to Houston, TX and found their forever... View Obituary & Service Information

The family of Ruby Zane Buck created this Life Tributes page to make it easy to share your memories.

Send flowers to the Buck family.