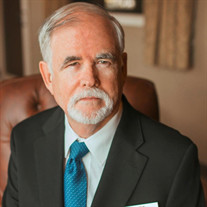 Ronald “Ronny” Ray Ritter of Willis, Tx passed away on October 24, 2021. He was born on February 27, 1957, in Houston, Tx to loving parents, Pink and Peggy Ritter. He grew up in Rockwall, Tx where he graduated from high school. After graduating he moved to Franklin, Tx and began driving an ambulance for Heartfield Funeral Home in Hearne. It was then, that Ronny felt his “calling”, and enrolled in Commonwealth Institute of Funeral Service in Houston. He graduated from mortuary school on October 28, 1980, as a Funeral Director & Embalmer. He worked for Heartfield Funeral Home for 29 years, during which time he opened Bremond Funeral Home. In 2009, he purchased Heartfield’s which became Heartfield-Ritter Funeral Home. Ronny and his wife, Paula, operated both funeral homes and Heartfield-Ritter Florist until their retirement in 2018. For 38 years he lovingly and devotedly served families in Robertson County. Ronny was the epitome of a public servant, not only as a Funeral Director, but as a Constable. In 1988 he ran for Constable of Pct. 2 in Robertson County and after 24 years, he retired in 2012. A new chapter began upon their retirement when Paula and Ronny moved to Willis, Tx on Lake Conroe. However, Ronny’s spirit was not “ready” to retire and he proudly took care of families in Montgomery County for the last 3 years working part time for Sam Houston Memorial Funeral Home. Ronny will be remembered for his sarcastic/dry wit and perfectly timed delivery, as well as his is ability to never meet a stranger. Ronny’s gift of making friends by finding ways to pick on people, and them love him for it, will forever be unmatched. He loved spending time with his family, eating at Pappadeaux, watching Blue Bloods and Gun Smoke, fishing, golf cart rides at sunset and had recently developed a new love for bowling. However, Ronny’s greatest love and legacy, will be the unconditional love he had for his family, especially his children and grandchildren. As he learned to “work” his phone, he could not wait to show pictures and brag about his grandchildren, or talk about how proud he was of each his of children. He was one of a kind in every way and his love truly knew no bounds. Ronny is preceded in death by his father, Pink Ritter. He is survived by his wife of 20 years, Paula Yount Ritter of Willis, Tx; mother, Peggy Ritter of Carthage, Tx; his children, Matthew Ritter and wife, Ashley of Bremond, Tx, Brian Ritter and wife, Jessie of Bremond, Tx, Jessica Ritter of Franklin, Tx, Heather Caldwell and fiancé, Tim Pickering of Willis, Tx, and Courtney Areias and husband, Brannon of Pt. Reyes, Ca; grandchildren, Emily Skeide, Samuel Skeide, Riley Ritter, Ty Ritter, Addison Southern, Alexa Areias, Oliver Schutz, Avonlee Ritter, Tynlee Ritter, Gage Ritter, Dottie Areias, Buster Ritter, Finn Areias, and Brady Ritter; brother, Paul Ritter and wife, Carol of Carthage, Tx; sister, Cheryl Zieschang and husband, Ted of Godley, Tx; mother-in- law, Emma Jean Yount of Willis, Tx; brother-in-law; Paul Yount and wife, Millicent of Willis, Tx; and numerous aunts, uncles, nieces and nephews and cousins. A Visitation will be held on Friday, October 29th from 10am – 11am at Sam Houston Memorial Funeral Home, 20850 Eva St, Montgomery, Tx 77356. Funeral Services will follow beginning at 11am at the Funeral Home. He will then take his last ride in a hearse to Smith Memorial Park in Willis for burial. In lieu of flowers, the family asks you make a donation in the names of Ronald Ritter/Pink Ritter to the American Parkinson’s Disease Association by visiting apdaparkinson.org or by mail to APDA, PO Box 61420, Staten Island, NY 10306. You may view a live streaming of the Funeral Service by clicking on the following link - https://client.tribucast.com/tcid/4877451336 .

The family of Ronald "Ronny" Ray Ritter created this Life Tributes page to make it easy to share your memories.

Send flowers to the Ritter family.