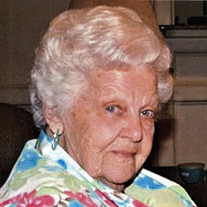 After a blessed and fulfilling life, the Lord Jesus Christ called Ragna Lynn Billingsley home on November 22, 2020, the same day of her wedding anniversary to her late husband, L.B. Billingsley. Known to friends and family as Rags, Lynn, Mimi, Mom, and Mrs. B, she was born on December 18, 1921 in Lufkin, Texas to Sam and Molly Hawthorne. As the youngest of eight children, she grew up with two loving parents and a houseful of siblings. In her youth, Ragna displayed an aptitude for academics and sports, becoming a state-ranked tennis player during high school. Later, she earned acceptance into Sam Houston State University, where she graduated with a bachelor’s degree, and eventually a master’s degree in education. At the age of 20, Ragna wed L.B. Billingsley. The next several years brought about the challenges of raising a newborn son as a single parent, while her young husband departed for war in Europe, to serve in the 8th Air Force. This difficult period also saw the deployment of many other family members to WWII in Europe. Despite these worries, she threw herself into supporting the war effort by working on a manufacturing line in Lufkin that produced defense material. Like so many women of her generation, she faced these hardships with graceful purpose and resolve, to eventually welcome L.B. safely home three years later in 1945. Upon L.B.’s return, they welcomed two more children and Ragna embarked on raising a family in post-World World II America. She pursued a number of jobs including working as a bookkeeper for Smither Wholesale and as a teacher and counselor in Aldine, Conroe, and Willis school districts. Eventually, she and L.B. grew their small business, Billingsley Parts & Equipment, into a successful enterprise in the automotive, school bus and trucking industry. Upon L.B.’s untimely death on April 10, 1985, Ragna stepped into the company’s leadership role where she devoted her energies to continuing the family’s business legacy. She was especially fond of the many valued team members of Billingsley Parts & Equipment and treasured their friendship. Ragna and L.B. modeled gratefulness, love for their fellow man, and service to our exceptional Nation. It is no surprise that part of her legacy included two sons and three grandsons who answered the call for service in the U.S. Armed Forces. In her later years, she married Lloyd Hooks and spent a number of eventful years traveling to some of the most spectacular destinations of our continent. She forever considered Lloyd a wonderful companion and friend. She also looked forward to spending time with her family where those joyous occasions at her home witnessed the laughter of her grandchildren, and later great-grandchildren, hunting Easter eggs, digging into overfilled Christmas stockings, shooting fireworks, and devouring her delicious Thanksgiving pies. Her love of gardening and animals was undeniable. She maintained bountiful greenhouses full of award-winning plants, and provided food, shelter, and love for all creatures, including cats, dogs, donkeys, and llamas. For many years, until she was no longer able, she hosted card games at her home and enjoyed spending time with her friends. She is predeceased in life by her parents, all of her brothers and sisters, her husband, L.B., friend, Lloyd Hooks, and her beloved eldest grandchild, Lyn Brandon Billingsley. She is survived by her three children, Don Billingsley, Danny Billingsley, and Lynda Billingsley Powell. She is also survived by the ever-devoted, Connie Faye Billingsley, whom she cherished and loved as a daughter. She was the proud grandmother to four surviving grandchildren, 13 great-grandchildren, and one great-great grandchild. She also counts among her many friends Molly Jannett and Jo Hayman, proprietor of Jo’s Beauty Shop, where she faithfully held twice weekly appointments for over forty-years. As her health began to fail, she relied on a number of women that cared for her with compassion. With her passing, she and her family would like to thank and recognize Shirley Tyson, Joyce O’Bryant, Jane Ledbetter, and Clara Jordan. She leaves behind an enviable legacy measured not in worldly possessions, but in love, devotion, charity, and kindness. We miss her terribly but take solace knowing she has seen the face of the Father and rests peacefully surrounded in everlasting love. Graveside services will be held on Wednesday, December 2, 2020 at 11am at the Billingsley family cemetery located at 788 FM 247, Huntsville, Texas 77340 (behind the Billingsley family home). Visitation will occur at the Billingsley family home upon the conclusion of the graveside services. Services will be officiated by Pastor Reagan Cooksey. The family welcomes donations to the L.B. and Ragna Lynn Billingsley Scholarship as an expression of sympathy instead of flowers. This scholarship was established to provide financial assistance to any Sam Houston State University undergraduate majoring in any discipline. Please submit donations payable to the “L.B. & Ragna Lynn Billingsley Scholarship” to SHSU, PO Box 2537, Huntsville, Texas 77341-2537. Memorial condolences to the family may be made at www.shmfh.com

After a blessed and fulfilling life, the Lord Jesus Christ called Ragna Lynn Billingsley home on November 22, 2020, the same day of her wedding anniversary to her late husband, L.B. Billingsley. Known to friends and family as Rags, Lynn, Mimi,... View Obituary & Service Information

The family of Ragna Lynn Billingsley created this Life Tributes page to make it easy to share your memories.

After a blessed and fulfilling life, the Lord Jesus Christ called...

Send flowers to the Billingsley family.