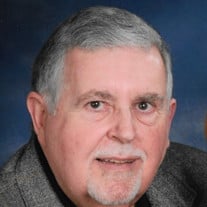 Paul Webb, of Huntsville, TX, passed peacefully in his home on October 17, 2021. He walked faithfully with the Lord to the age of 79 and then stepped into heaven after many years of health problems. Paul was born to Ed and Jayne Webb on April 19, 1942 in Drumright, Oklahoma. A career in the newspaper industry started on a paper route at age 12 and spanned over a 50-year period. Following in his father's footsteps, in due time he became an experienced journeyman at the Alamogordo Daily News. While attending Baylor University in the early 60's, Paul worked as a linotype operator at the campus newspaper, The Baylor Lariat. In 1962, he became an ordained minister and preached at churches in Waco and Caldwell. After working for several printing operations, it was at The Temple Daily Telegram where he met Ruth. They married in 1977 and moved to Michigan where Paul was employed by Booth Newspapers, in production management at the Jackson Citizen Patriot and later at The Grand Rapids Press. The couple returned to Texas when Paul became the applications manager for a newspaper tech firm in 1982. They started their family while living in Carrollton and eventually landed in Far North Dallas. He joined The Dallas Morning News in 1985 and retired from its Plano printing plant 20 years later as Vice President of Production. Soon after his retirement, Paul and Ruth moved outside of Dallas, first to Glenn Heights and then to Midlothian. Paul was active on various church committees, both at First Baptist Church of Carrollton and at Eastridge Baptist of Red Oak. He concluded his last ministry role as church treasurer at Eastridge Baptist. Paul cherished the friendships developed in the B.A.S.I.C. Sunday School class and at socials hosted in the home. After Ruth retired, they made their home in Huntsville to be close to family. Paul enjoyed road trips, reading a newspaper, Texas Rangers baseball, purchasing a new car every other year, and games such as Rummikub and Sudoku. His greatest joy however was being called "Grandpa." Paul is survived by his wife, son Preston and wife Alexis, and two granddaughters, as well as one niece, two nephews and several cousins. He was preceded in death by his parents, sister Debi Harper, and brother Tim Webb. In lieu of floral gifts, the family requests that memorials be made to the University Heights Baptist Church Building Fund from those who wish to contribute: Give Online Link: www.uhbc.net/give Please select Fund: "Memorials" Please enter Memo: "Building Fund/Paul Webb" Give by Mail University Heights Baptist Church 2400 Sycamore Avenue Huntsville, TX 77340 Memo: Building Fund/Paul Webb

Paul Webb, of Huntsville, TX, passed peacefully in his home on October 17, 2021. He walked faithfully with the Lord to the age of 79 and then stepped into heaven after many years of health problems. Paul was born to Ed and Jayne Webb on April... View Obituary & Service Information

The family of Paul Franklin Webb created this Life Tributes page to make it easy to share your memories.

Paul Webb, of Huntsville, TX, passed peacefully in his home on...