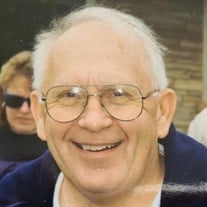 Paul Friberg Morstead, Montgomery, Texas, passed away with family present on Tuesday, June 8. Paul was born in Stambaugh, Michigan, on July 27th, 1931. His father moved the family to Hibbing, Minnesota in 1943 to work in the iron ore mines. After graduating from Hibbing High School in 1949 he attended Hibbing Junior College where he met his first wife, Mildred Pixley, from nearby Bear River. He finished his degree in Chemical Engineering at the University of Minnesota in Minneapolis and was recruited by Conoco into the refining department where he worked his entire 39-year career. Paul and Mildred raised four children, Lynn, John, Rolf and Stuart, in their 36 years together while living in many places in the world where Conoco had a refinery or petrochemical joint venture, including PASA in Argentina and the Humber refinery in England. When Mildred unexpectedly passed away in 1990, Paul was fortunate to meet Mary George Meade, with whom he shared 29 years in his long, active retirement in Walden on Lake Conroe. He enjoyed his golf, family gatherings, travel, reading and music by Ray Charles. He will be dearly missed by all for his endless supply of old stories and wry wit. Like many of his generation, he was humble, hardworking, and adamant that his children and grandchildren bring that same sense of purpose to whatever they did. He is survived by his children and their spouses: Lynn and Kip, John and Isobel, Rolf and Katie, and Stuart and Carlin, Mary George’s daughters: Elaine and Charlotte and James (husband of Charlotte); Paul and Mary George’s grandchildren: Heather, Jimmy, Thomas, Patrick, Daniel, Heidi, Jessica, Sarah, Gabrielle, Olivia, Brennan, Sophie, Sharon, George, Philippa, John, Lillian and Julia; their great grandchildren: Callum, Sylvie, Fia, Maxwell, Beckett, Maggie, Rosalie and Lori; spouses of their grandchildren: Stephen, Lauren, Caitlin and Nathan. There will be a small private family memorial at their home. He will be buried in Lake Charles, Louisiana, next to his first wife, Mildred, at a later date. In lieu of flowers, the family ask that any donations be made to the Salvation Army.

Paul Friberg Morstead, Montgomery, Texas, passed away with family present on Tuesday, June 8. Paul was born in Stambaugh, Michigan, on July 27th, 1931. His father moved the family to Hibbing, Minnesota in 1943 to work in the iron ore mines.... View Obituary & Service Information

The family of Paul Friberg Morstead created this Life Tributes page to make it easy to share your memories.

Send flowers to the Morstead family.