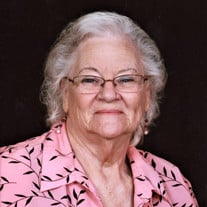 Patricia was born in Leesville, Louisiana on September 17, 1939 to Samuel Edward Parker and Violet Kathleen Harrison-Parker. At an early age, she became a member of the family of her elder sister, Ruby Duke (husband Ellis Duke, children: Sandra, Ellis Jr. and Ruby Ann) in Splendora, TX. On July 21st, 1956, Patricia married James Marvin Brice and they were wed for a very happy 65 years and 8 months. Patricia and Jim soon produced four lovely children: Denise Gayle Wolfe, the eldest- now deceased, who was a laboratory technician for HMH. Denise had one daughter Deonna Andre (husband Rob and two boys: Miles and Ethan); John Michael Brice, a Houston fire fighter for 35 years, now retired, married to Debbi Brice; Eva Renee Brice-Spillman, the youngest daughter, employed by TDCJ, with two children: Paige and John Raymond, Jr.; and Bradley Alan Brice, the youngest, manager in a LaPorte, Tx chemical plant, who is married to Kristi Brice and has three children: Maya, Zoe, and Sydra . Patricia always portrayed compassion and unconditional love for those whom she encountered. She dearly loved her own children and had a special place in her heart for other children, much as if they were her own. She was a devout Christian who invited the Lord into her heart at a young age. Pat spent several years working with young children and being involved in many other activities for the churches she and Jim attended. Patricia developed diabetes many, many years ago. She fought and struggled with it quite well. However, she was finally overcome by diabetic ketoacidosis. At 7:25PM on March 21, 2022, she made her departure from Earth, and stepped into heaven with Jesus. Patricia was preceded in death by her parents, Edward and Violet Parker, her sister Ruby Duke, and her daughter Denise Wolfe. She is survived by her husband, James Marvin Brice; her two sons: Mike and Brad and their families; her daughter Eva Renee Brice-Spillman and her two children; her "sister'' Sandra Duke Hales; Sandy's daughter, Wendy Hales Everett; "sister" Ruby's children; Stephen Blackman and Stephanie Blackman - Lawrence; her "brother'' Ellis Duke, his wife Linda Duke, their children Michael Wayne Duke, Crystal Duke Dubose; and her sister Sharon and her husband Don Jaggers. Also, she is survived by Deonna Andre and her family; and many others whose lives she has touched. A memorial service will be held on Friday, March 25, 2022 at 10:00 am at Sam Houston Memorial Funeral Home in Huntsville, TX. Memorial condolences to the family may be made at www.shmfh.com.

Patricia was born in Leesville, Louisiana on September 17, 1939 to Samuel Edward Parker and Violet Kathleen Harrison-Parker. At an early age, she became a member of the family of her elder sister, Ruby Duke (husband Ellis Duke, children: Sandra,... View Obituary & Service Information

The family of Patricia Ann Brice created this Life Tributes page to make it easy to share your memories.

Send flowers to the Brice family.