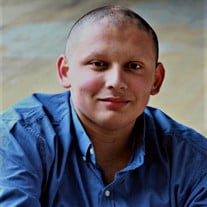 Nicolas Cruz Tamez’ Earthly journey ended on April 25, 2021. He was born on August 14, 2002 in Houston, Texas. He was preceded in death by his paternal grandparents Reuben Garcia Tamez and Mary Cruz Tamez and Great Aunt Esperanza Moreno. He leaves behind his parents Reuben Cruz Tamez, Jeanne-Marie Matthews and her husband Alton Lorenzo Matthews; sisters Giuliana Tamez, Halia Hope Matthews, Sojourner Matthews, Eden Matthews; cousins Benjamin Hall, Christian Hall, Ethan Leighton, Gavin Leighton, and Devon Leighton; Aunts Rita Tamez, Lydia Hall and her husband Uncle Mike, Aunt Juliane Leighton and her husband Alex Leighton. Nicolas is also survived by his Nonni Theresa Lamberti, his Opa Karl Listl and his wife Uncha Listl, Debbie Tamez, and Great Aunts Mary Ruiz, Alice Waneck, Margaret Lopez, Cathy Tamez; Great Uncles Thomas Lopez, Ysidoro Tamez and their children and grandchildren. Growing up, Nicolas was diagnosed with anxiety, dysgraphia, and ADHD. Social situations that are taken for granted and simple tasks that are routinely performed, became monumental tasks for him to overcome. From a very young age, traditional classes challenged him because he could not sit at the carpet with the other kindergartners. He was the one rolling around in the back of the room. He couldn’t stand in the lines in straight rows with the class; he created the kink. He was the one that “accidentally” took home his teacher’s school keys and the glass gem from her desk. But, when he was asked any question related to the lesson for the day or class discussion, he had the answer. Every time. While Nicolas didn’t fit the mold of a model student and may have even been viewed by some as a disruption, he was listening and learning in his own way--in the only way he knew how. Nicolas was a very smart boy, but it didn’t always transition to the gradebook. His passion was science and history, but he was good at writing and math as well. He could break down any historical event and oftentimes would be up late working with his siblings over coursework questions. He loved to learn and enjoyed helping others whenever possible. Admittedly, there were moments when his anxiety got the best of him. He had struggled with the idea of “becoming an adult” and having more responsibilities placed on him. These challenges may seem like the norm for young adults but, again, in Nicolas’ case they were compounded. Despite these trials, Nicolas rose to the challenge and matured by leaps and bounds. In his final year of high school, he held a job, improved his grades, and, for the first time, really started looking forward to and getting excited about what was coming next. He was a member of KickStart Kids (Karate) for 7 years and worked daily to build on the 8 values of the program- honesty, loyalty, courage, discipline, respect, dedication, kindness, and responsibility. Some traits he learned quicker than others. Nicolas was a sweet, sensitive boy who loved to be around people, especially his beloved family. Having his sisters in the room with him gave him joy and he loved each of them deeply and missed being away from home. We remember how he would be silly and make his sisters laugh to distract them. He adored his grandparents and would come regaling of the conversations of what he learned or what foods they made for him. He was sensitive and couldn’t take it if his mom was mad at him. He’d always come back to sort things out and make sure that his mom knew how much he loved her. He was intuitive and empathic and could tell when someone was hurting, and he wanted to comfort and help. His love for family was shown in the simplest forms of support from offering a gentle smile to showing support for Alton’s BBQ YouTube channel and sneaking glances at those growing stats. Like a typical teenage boy, playing video games with his father and friends gave Nico chuckles and endless, and we mean endless, hours of pleasure. He was an avid gamer and loved to spend his time on his different consoles taking out zombies or saving the world from some evil villain. Many an hour was spent playing Call of Duty, Cuphead, and Minecraft and so many others. His weakness for chocolate and pasta knew no bounds. His college path was taking him on a history/political science journey, but he loved the astronomy class and raved about the field trip they took to the observatory to look at the stars. He loved taking photos around campus and would happily share his images on Instagram. He regularly sent his sisters music to check out and funny memes. He loved learning to play his ukulele, ocarina, and his harmonica. We often heard him up the stairs picking at a new tune. Nico was a boy of many talents and we can only imagine what wonderful things he would have accomplished. Nicolas will be greatly missed. In lieu of flowers, we’d love you to consider donating in Nicolas’ name to either of the charities listed below. Both are focused on teenagers and mental health issues including anxiety which Nicolas struggled with. 1. The Jason Foundation https://jasonfoundation.com/ 2. The Jed Foundation (https://www.jedfoundation.org/mental-health-resource-center/ Services will be held on Monday, May 3, 2021 at Sam Houston Memorial Funeral Home in Huntsville, TX at 2:00pm. Memorial condolences to the family may be made at www.shmfh.com.

The family of Nicolas Cruz Tamez created this Life Tributes page to make it easy to share your memories.

Send flowers to the Tamez family.