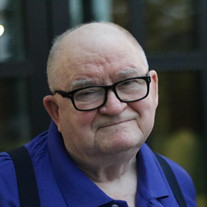 Born in Fairfield, Iowa, on December 22, 1946, to Eugene and Marie (Daily) Friedrichs, two very unsuspecting parents of just how ornery a son could be, was Michael William Friedrichs. He was the second of 5 rowdy children and lived in Iowa and South Dakota before settling in Northern Illinois in his mid-teens. He lived in many places, but he grew up in the Army in Vietnam. He wrestled and graduated from West Aurora High School, where he met his wife, Lynn Carol Blanton. They married following his return from Vietnam on August 7, 1971. Mike worked two jobs while attending university full time. In 1975 he graduated from Aurora University with degrees in Electrical and Mechanical Engineering. A few years later in 1979, he moved his family to Texas to work in the oil patch. Living just shy of 75 colorful years, Michael passed away on November 29th, 2021. Mike lived life the way most of us wish we could, a bit loud with some rule-breaking, which made for fun stories for his children and grandchildren. At 18 he enlisted in the Army and became a paratrooper with the 3rd Brigade, 1st Air Cavalry and served with the 82nd and 101st Airborne in Vietnam. He was in the Tet Offensive of 1968, and a Purple Heart, taking two bullets for his country. He even chose to return for a second tour to rejoin his buddies. He met President Johnson in Japan. Professionally he had many jobs designing and engineering downhole tooling for the oil & gas industry. He sailed the oceans on a drillship for Texas A&M’s drilling program and is rumored to have sailed all seven seas. He rock climbed, ran marathons and weight lifted with the Russian cycling team. He was an inventor, a machinist, mechanic, HAM enthusiast, and was in the middle of building his own radio to communicate with others across the globe. He knew his guns, diesel engines, motorcycles and muscle cars. He loved hiking, camping, and hunting; although most of the trophies were the tracks he found. In his youth, he was often mistaken for John Wayne and later in life he enjoyed reruns of old westerns. As a husband, the 50 years spent together with Lynn were quite the ride. They made beautiful memories together, and like all marriages, also went through their tough times. They always came out of those times stronger and united. These past few years they’ve enjoyed retirement spending time with family. Mike was a laid-back father and took things in stride. From personal experience it would have been hard for him to do otherwise. As a kindergartner he had been returned home in a squad car and in every town he lived, local law enforcement new his name and car. His children love him and revere him for what he accomplished in life, for the love he gave them and experiences they shared. Mike was always learning something new, stubborn as a mule, strong as an ox but somehow gentle as a lamb. He was a storyteller, will be forever missed and is likely already raising a little hell inside those pearly gates. Mike was preceded in death by his parents and all of his siblings; his parents, Gene and Marie; his siblings, Gina (Shah), Clark (Carla), Jon (Peggy) and Marcia. He is survived by Lynn and his children James (Lori) and Kim (Matt), and grandchildren Maddie, Carter, Grace, Cameron, and Thad. We will honor his life on Saturday, December 4th, 2021, at Sam Houston Memorial Funeral Home in Montgomery, Texas. Reception/Visitation begins at 10:30 am with the service at 11:00 am. Luncheon will be served afterwards at his daughter’s home in Spring, Texas. Memorial donations may be made to www.foldsofhonor.org. Family requests that guests wear masks if they are unvaccinated.

Born in Fairfield, Iowa, on December 22, 1946, to Eugene and Marie (Daily) Friedrichs, two very unsuspecting parents of just how ornery a son could be, was Michael William Friedrichs. He was the second of 5 rowdy children and lived in Iowa... View Obituary & Service Information

The family of Michael William Friedrichs created this Life Tributes page to make it easy to share your memories.

Send flowers to the Friedrichs family.