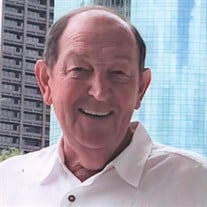 On Wednesday, November 18, 2020, Michael (Mike) Castleberry, passed away after a hard-fought battle with pancreatic cancer. Mike was born on October 14, 1942 in Springfield, Missouri to Marvin and Jean Castleberry. He enjoyed an idyllic childhood with his brother Ed and a menagerie of pets exploring the outdoors, camping, fishing, playing sports and other school activities. He studied at Durey College before completing his degree in Petroleum Engineering at the Missouri School of Mines and Metallurgy at Rolla, Missouri in 1965. After a few years in the workforce with Amoco Petroleum, Mike enlisted with the Navy. After OCS in Newport, Rhode Island, Mike was stationed in Okinawa Japan. His final tour was back in Newport where he met his wife of 49 years, Joan Mullare. Mike returned to Amoco. His career with Amoco continued for thirty-five years and nine cities in two countries ending in retirement in 1999. Mike retired in 1999 and settled in Bentwater on Lake Conroe in Montgomery, Texas. Mike took full advantage of retirement filling his time with golf, travel, photography and books from his trips. He was also active in the Bentwater Men’s Organization, Saint Vincent DePaul Society and as President of the Lake Conroe Community Network. He and Joan traveled to many areas of the globe including Europe, Russia, Iceland, Peru and the Galapagos Islands; the favorite being two safaris in Africa. His travel provided him beautiful subjects for his photography, his photo books, slideshows, cards and calendars. Mike always considered his greatest accomplishments were his family and the many friends he made along the way. Mike is preceded in death by his parents and sister in law, Gail Mullare. He is survived by wife of 49 years, Joan; daughter, Kristen Castleberry of Houston, Texas; and son, David Castleberry of Montgomery, Texas; brother, Marvin (Ed) Castleberry (Elizabeth) of Lacey, Washington; brother in law, David Mullare of Hanover, Massachusetts; and many loving nieces and nephews. A Memorial Mass will be held at St. Mary’s Catholic Church under the outside pavilion in Plantersville, Texas on Monday, November 23rd at 10:30 am. In lieu of flowers, contributions may be made to MD Anderson Cancer Center – Pancreatic Cancer Research in honor of Michael Castleberry, P.O. Box 4486, Houston, TX 77210-4486 or www.mdanderson.org/gifts.

On Wednesday, November 18, 2020, Michael (Mike) Castleberry, passed away after a hard-fought battle with pancreatic cancer. Mike was born on October 14, 1942 in Springfield, Missouri to Marvin and Jean Castleberry. He enjoyed an idyllic childhood... View Obituary & Service Information

The family of Michael "Mike" David Castleberry created this Life Tributes page to make it easy to share your memories.

Send flowers to the Castleberry family.