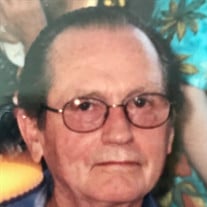 Melvin Wade Jenkins 86 of Huntsville, Texas passed away on March 16,2021 and lost his fight with Pulmonary Fibrosis & C.O.P.D. He was born in Dallas Texas on June 09, 1934 to Geneva McCollum & Owen Jenkins. He met his wife, Judith June,1959 after returning from Germany and discharged from the army. They met June 1959 they married April 21,1960. Their daughter Kelly Lynn was born May 27,1961, followed by twins sons Richard Allen and Ronald Wade were born August 19,1962. Mel started off his married life as an 18-wheeler truck driver. Then decided to try for a position with the maritime I.LA. longshoreman as a clerk. He belonged to maritime I.LA. longshoreman assoc. as a clerk. He belonged to local 1351 clerks and checkers. He retired in June 1990. Melvin is preceded in death by his Son Ronald wade Jenkins, Mother Geneva McCollum, Father Owen Jenkins, Sisters Pearlene Bennet and Wanda Jenkins, Stepmother Kathryn Jenkins. Survivors include wife Judith Hoch Jenkins, Daughter Kelly Jenkins-Bentsen and husband Guy, Son Richard Allen Jenkins, Brother Larry Jenkins and wife Jennifer, Brother Donald Jenkins, Sister Doris Morse and Sister Linda Moreno and husband Ringo. Many Nephews and Nieces and many Great Nephews and Great Nieces. Mel had a quiet soul and loved nature and animals, domestic and wild. He found a bird covered in tar struggling and he sat on the back porch removing the tar for over an hour. He succeeded, set the bird in the rafters and it flew away like nothing ever happened. Mel was a doer; he could build most anything. Even with hands inflicted with rheumatoid arthritis it was amazing the things he could do (with the help of power tools). He was a great repairman, handy to have around. If he was not sure about something, he would find a manual and read up on the problem. Yes - he always read the instructions enclosed - words of wisdom to you guys out there! One time the dryer went out so my Mr. Fixit went to work figuring out the problem. After about 30 minutes he came in the back door and said “You need to call a repairman”. The repairman arrived, went out to the dryer. About 10 minutes later, he returned and could not find anything wrong with dryer. Mel followed him back out to the dryer and the repairman left with pay. Mel looks at me like it was my fault and said “Why didn’t you tell me you had to close the door to make the dryer run?”. The rest is history. He was a gentleman of many skills and was loved by all that knew him and he will be missed beyond description. A memorial service will be held on Saturday March 27, 2021 at Sam Houston Memorial Funeral Home in Huntsville, Texas at 12noon. In lieu of flowers, the family asks that you make a donation to The Arthritis Foundation, 1-800-283-7000, https://www.arthritis.org or the Rita B. Huff Animal Shelter, 530 Bearkat Blvd., Huntsville, TX 77340, 936-295-4666, https://rbhhumanesociety.org. Those wishing to leave memorial condolences for the family may do so at www.shmfh.com.

Melvin Wade Jenkins 86 of Huntsville, Texas passed away on March 16,2021 and lost his fight with Pulmonary Fibrosis & C.O.P.D. He was born in Dallas Texas on June 09, 1934 to Geneva McCollum & Owen Jenkins. He met his wife, Judith June,1959... View Obituary & Service Information

The family of Melvin Wade Jenkins created this Life Tributes page to make it easy to share your memories.

Melvin Wade Jenkins 86 of Huntsville, Texas passed away on March...