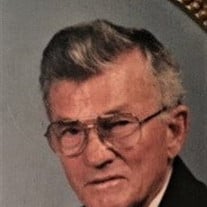 Mathew Emmit Nelson, Jr., born to Mathew Emmit Nelson and Vera Belle (nee: Greene) Nelson on October 22, 1927 in Odessa, Texas, went peacefully to be with his Lord and Savior Jesus Christ on September 27, 2021 in Huntsville. He is preceded in death by his parents and devoted wife Marlene, as well as siblings and spouses Jack and Nelda Nelson, Gwen and Harold Edwards, Thelma and Frank Montgomery, Babe and Earl Williamson, Grace Gober, Emmit Nelson, and Pat Barton; in laws Pete Crawford, Jerry Sweeney, and Lois and Howard King; and special nephew and friend Frankie Montgomery. He is survived by children and spouses Suzette Shaw, Matt and Mary Nelson, Nanette and Harold Ramsey, brothers and sisters in law Buddy Barton and Beth, David Gober, and Colleen Crawford; grandchildren and spouses Heather Carson, Chris Hill, Shane Hill and Sallee, Derek Nelson and Sarah, Kim Starr and Mike, Pam Coll and Steve, Stephanie (Stacy) Jackson, Donna Cox, Nicole Holland and Ken, Jake Ramsey, and Emily Craft and Derek, great grandsons Harris, Tucker and Blake Carson, Jack Nelson, Giovanni Hill, Jeremy Hendrick, Brax Farhood, Jake Holland and Jordan, Kyle and Sean Riegler; great granddaughters Hayden Carson, Serene Jackson, Chloe Starr, Courtney Starr, Jessica Ives and Dave, Paige Holland, Sharon Holland, and Bella Craft; great-great grandsons Caleb Starr, John David Hendrick, and Jenson Hendrick; also, numerous nieces and nephews to whom he was Uncle Sonny. He held each as precious in his heart and loved all of them dearly. Mathew grew up in Odessa, Texas, where he entered local rodeos as a young man, often winning the weekly steer riding and flag races. As a boy, he was quite the horseman helping his dad Emmit break many young horses for neighboring ranchers. He also enjoyed playing competition tennis for his high school in Pyote, Texas. He enlisted in the United States Air Force in January 1946 at 18 years of age. He processed in at a base in El Paso, did basic training at San Antonio, radio mechanic school in Scott Field, Illinois, then to Westover Field, Massachusetts before serving two years in Germany from 1947 to 1949. He was stationed at Oberpfaffenhofen Air Force base (southern tip near Munich) during post war allied occupation of Germany. This base was maintenance base for airplanes used to airlift food, supplies and fuel to Berlin during the Berlin blockade by Russians. Mathew was discharged in February 1949 as a corporal and then served four more years in the reserves as an Airman Second Class. He met the love of his life when Marlene moved to Odessa from Chicago. After a whirlwind 6-week romance, he and Marlene married on June 26, 1950, a marriage that lived on for 68 wonderful years until her passing in December 2018. Mathew and Marlene made homes in numerous places in Texas as well as Seattle, Washington and Mesa, Arizona. He worked all over West Texas in the oil fields as a roughneck and heavy equipment operator and also operated a cotton farm outside Seminole. In 1962 they moved to Kingsland Texas where he did construction and tractor work and, with Marlene, ran a couple of fishing camps on Lake LBJ, which his kids just loved. In 1968 they moved to Livingston Texas where he continued doing construction work. In 1972 they moved to the Austin area where he ran heavy equipment until retirement and move to Mesa, AZ for 2 years. Moving back to Texas, they lived many years at Morgan's Point until making their final home in Huntsville in 2008 with Suzette. He recently moved to Creekside Retirement where he made many friends among residents and staff alike (whom he considered family), enjoying daily outings to the front porch and Rose Garden with his buddy Mr. H as long as he was able. Mathew was a devout Christian man, serving in various capacities in his local churches including helping Marlene teach children's' Sunday School, 1st - 6th graders New Christian classes and serving in various evangelism ministries. He continued a godly witness right up to his homecoming, sharing his faith, TV church services, and his pastor's sermons with Creekside nurses and aides. He often told them "you better listen and take hold of this- Jesus IS the truth". He was a member of Cook Springs Baptist Church who loved to read the Bible, listen to Brother Roberts sermons, and pray daily for family, friends, and his church family. He enjoyed taking a daily "good brisk sit" on the front porch, soaking in many fond memories of years past, and counting his blessings. Through the years he enjoyed making outdoor furniture and birdhouses as a hobby, giving most as gifts, playing cards and watching movies new and old with Marlene. He was noted for having his daily jolt of coffee at any time day or night. But most of all he loved all his family dearly. His life was not wasted because he had a loving family, he consistently invested in the lives of others (even if it meant he had to do without himself), and he served the God who made him until he went home and that's all that really matters. The Righteousness of God in Christ, A Godly man, Son, Father, Grandfather, Great and Great Great Grandfather, Brother, Uncle, Friend and Patriot. Mathew is finally at rest in heaven and glad to see Mom again whom he missed dearly. Dad, you will be missed more than words can express. We learned so much from you. We love you. Services will be at 11am on October 9, 2021, at Cook Springs Baptist Church in Huntsville, Texas. In lieu of flowers, if you wish, donations can be made to the Fellowship and Food Committee of Cook Springs Baptist Church or the charity of your choice. Memorial condolences may be made to the family at www.shmfh.com. Services may be viewed live at the following link: https://client.tribucast.com/tcid/4208738855

Mathew Emmit Nelson, Jr., born to Mathew Emmit Nelson and Vera Belle (nee: Greene) Nelson on October 22, 1927 in Odessa, Texas, went peacefully to be with his Lord and Savior Jesus Christ on September 27, 2021 in Huntsville. He is preceded in... View Obituary & Service Information

The family of Mathew Emmit Nelson, Jr. created this Life Tributes page to make it easy to share your memories.

Send flowers to the Nelson family.