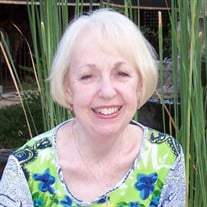 Mary Elizabeth Heard Jones passed away peacefully in her sleep in the early morning on March 5, 2021 in her home in Huntsville, Texas. Mary Elizabeth (Mary E.) was born on September 21, 1941 in Monroe, Louisiana to James Isaac Heard and Oneta Arbuthnot Heard. She grew up in West Monroe, Louisiana and attended Millsaps Grammar School, graduating from West Monroe High School in 1959. Following, she earned a B.A. in Commercial Art from Louisiana Tech University in 1963, graduating Magna Cum Laude. She worked in the commercial art field 5 years in Shreveport, Louisiana and Dallas, Texas, following which she became a self-employed artist in fields of design, calligraphy, and painting. Mary E. Heard married Noel Ray (Ray) Jones of Dallas, Texas in 1968. They had two children, Michael Ray born in 1969, and Susan Elizabeth born in 1970. They lived in Irving and Waxahachie, Texas, relocating to Tuscaloosa, Alabama after their children had begun their adult lives. They retired in West Monroe, Louisiana, moving in 2010 to Huntsville, Texas to be closer to family, particularly their two grandchildren, Calvin and Lydia Henderson. Mary E. loved anything artistic. She was a painter, quilter, pianist, and calligrapher, and she loved engaging her grandchildren in cooperative art projects. She loved to cook and especially bake cookies, cakes, and pies for her family. She was active in her church, University Heights Baptist Church (as well as others she attended through her life) and engaged herself in activities such as Bible Study Fellowship and Scripture Memory Fellowship. She loved God with her whole heart and lived out her commitment to Him in tangible ways, such as serving as a tutor in her church’s Arise2Read program. She was an animal lover and always had cats or dogs around her throughout her life. She and Ray loved traveling together, with their favorite locations being the mountainous areas of the Western United States; however, they also enjoyed the water, taking river and sea cruises together. On their 50th wedding anniversary, they celebrated with a trip to Ireland and Scotland. Mary E. would entertain anyone who listened with anecdotes from this meaningful trip she and Ray took together. She is proceeded in death by her parents, James Isaac Heard and Oneta Arbuthnot Heard. She is survived by her husband Noel Ray Jones and her two children, son Michael Ray Jones and his wife Suzanne, and daughter Dr. Susan Elizabeth Henderson and husband Dr. Craig Henderson, as well as her grandchildren Calvin and Lydia Henderson. Memorial services will be held on Tuesday, March 9, 2021 at Sam Houston Memorial Funeral Home in Huntsville, Texas at 2:00pm. Dr. Richard Rogers will officiate the service. Memorial condolences to the family may be made at www.shmfh.com. https://www.tributeslides.com/tributes/show/T28NWJC2FK3ZYH9L

Mary Elizabeth Heard Jones passed away peacefully in her sleep in the early morning on March 5, 2021 in her home in Huntsville, Texas. Mary Elizabeth (Mary E.) was born on September 21, 1941 in Monroe, Louisiana to James Isaac Heard and Oneta... View Obituary & Service Information

The family of Mary Elizabeth Jones created this Life Tributes page to make it easy to share your memories.

Mary Elizabeth Heard Jones passed away peacefully in her sleep...