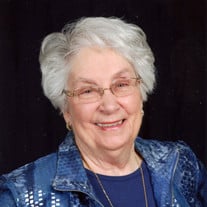 Mary Janice Andrews age 88, went to be with the Lord on Thursday, January 13th, 2022. The daughter of James and Norma McCarthy, she was born in the small town of McComb, Mississippi on April 15th, 1933. She is survived by her three children: daughter Stacey Ann Oswald and her husband Kelly; son Paul Murray Andrews and his wife Melissa; daughter Norma Kathleen Podlin and her husband David; and her seven grandsons, Joshua Mathew Podlin, Jacob Andrew Podlin, James Paul Andrews, Jack Ryan Andrews, Avery Joseph Oswald, Joseph Daniel Andrews, and Jonathan Thomas Andrews. She is preceded in death by her husband of 54 years, Paul Kimball Andrews, her sister Norma Monier and her brother James Martin McCarthy. Working her way to better her education, she began at the local junior college and then attended The University of Southern Mississippi where she earned her teaching degree. Janice left Mississippi to start her first adventure as a teacher in New York City. While there, she was offered a 2-year contract to teach in Kyoto, Japan with the US Air Force. Shortly after her return from Japan, she began teaching in Houston and later married Paul in 1960. While she worked in a few other school districts, she worked for the Galena Park School District for over 30 years. She was a member of the Zeta Upsilon chapter of Delta Kappa Gama Society and the Classroom Teachers Association of Galena Park. She was in several bridge clubs, was an avid reader and she participated in all her children’s activities throughout their lives. She gave her children the love of travel with many summer vacations to different states, which often included amusement parks, but always history. After retirement she and Paul moved to Elkins Lake where she learned to play golf, continued her love of bridge and reading, and joined many other game and social groups. They traveled to many golf courses in the United States and went on several overseas adventures. As a child of an Irish immigrant, she was most proud of her trip to Ireland where she kissed the Blarney Stone. She was a faithful member of St. Thomas the Apostle Catholic Church in Huntsville, TX. She was much loved and will truly be missed by her family and friends, but in her own words, “I lived a great life”. In lieu of flowers, please consider donating to the Macular Degeneration Association https://macularhope.org or to St. Vincent de Paul Society of Huntsville, TX. https://saintthomashuntsville.org Memorial condolences may be made to the family online at www.shmfh.com

Mary Janice Andrews age 88, went to be with the Lord on Thursday, January 13th, 2022. The daughter of James and Norma McCarthy, she was born in the small town of McComb, Mississippi on April 15th, 1933. She is survived by her three children:... View Obituary & Service Information

The family of Mary Janice Andrews created this Life Tributes page to make it easy to share your memories.

Mary Janice Andrews age 88, went to be with the Lord on Thursday,...

Send flowers to the Andrews family.