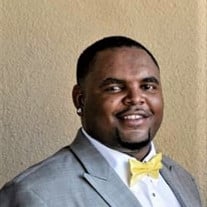 Marcus Dewayne Williams, 36, of Conroe, TX, passed away on September 14, 2021. Marcus was born on September 11, 1985, in Trinity, TX. He grew up in Groveton, TX, and attended school in Groveton from Kindergarten through 12th grade where he met the love of his life, Julie (Jules) Williams. He played all the sports but his favorite were the Friday night lights as a Groveton Indian. He then went onto college at Sam Houston State University in Huntsville, TX, where he majored in Kinesiology, and then obtained his Masters Degree in Curriculum & Instruction. He was drafted by the Huntsville Hornets and was a physical education teacher & coach for 11 years. During his tenure he helped shape the lives of countless students. Everyone who knew Marcus knew he loved family, football, and telling stories. He impacted and brightened the lives of his family & friends and all who knew him. Marcus had a smile that would light up the room. He will be missed tremendously and his legacy will live on. He is survived by his high school sweetheart and wife of seven years, Julie Williams, and precious four year old daughter, Aubrey Williams. His loving mother, Jessica Williams and step-dad, Chris Reece. Sisters, Camille (MeMe) Denning and Marissa Williams and brother, Cord Williams. Grandmother, Shirley Thomas-Williams. Mother-in-law, Donna Dial and sister-in-law, Angela Dial. Special uncle, Darell Williams (Cassie) and Uncles Delrasil (Sicily), Jessie Williams, and Steve Thomas (Aresha). Aunts, Christine Williams and Ella Derry. He is also survived by numerous cousins, nieces, & nephews. Also his best friend, Bam Brown, who was more like a brother. He is preceded in death by grandfather Jessie T. Williams, grandmother Flora L. Williams, and uncle Rodney Thomas. The family will receive friends at 9:00 am, with funeral services to begin at 10:00 am on Saturday, September 18, 2021 at Northside Baptist Church in Huntsville, Texas. Interment will follow at Williams Family Cemetery. Pallbearers include Bam Brown, Jarrett Hill, Justin Calvin, Alex Pennington, Aaron Folds, & Chris DeBreaux. Honorary pallbearer is Cord Williams. Donations can be made to the Groveton Ex-Students Association in memory of Marcus Williams. Memorial condolences may be made to the family www.shmfh.com.

Marcus Dewayne Williams, 36, of Conroe, TX, passed away on September 14, 2021. Marcus was born on September 11, 1985, in Trinity, TX. He grew up in Groveton, TX, and attended school in Groveton from Kindergarten through 12th grade where he met... View Obituary & Service Information

The family of Marcus Dewayne Williams created this Life Tributes page to make it easy to share your memories.

Marcus Dewayne Williams, 36, of Conroe, TX, passed away on September...