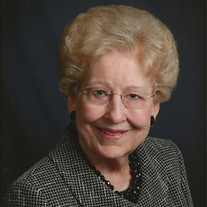 Lillian Elizabeth Tucker Lanier, wife, mother, grandmother, great-grandmother, and a long-time resident of Huntsville, Texas died on June 9, 2021 at the age of 94, with her family by her side. Lillian is survived by Gus Lummus Lanier, Jr. and spouse Carol Lanier of Katy, Texas; Glynda Ann Lanier Culak and spouse Donald Culak of Magnolia, Texas; Lynda Gail Lanier Henry and spouse Tom Henry of College Station, Texas; Guy Tucker Lanier and spouse Amy Lanier of Sugar Land, Texas; and sisters-in-law Mary Jane Leathers and Dolores Tucker; seven grandchildren (Chris Henry Stroech, Traci Henry Hinchcliffe, Brent Lanier, Lance Lanier, Jason Culak, Guy Lanier and Katy Lanier) and six great-grandchildren (Graceyn, Braelyn and Kaleb Stroech; Lucy and Abigail Hinchcliffe, and William Culak, with another Culak great-grandchild on the way). She is pre-deceased by her husband Gus Lummus Lanier, Sr.; her parents Helen Louise Butler Tucker and John Cline "J.C." Tucker, Sr.; her brothers John Cline Tucker Jr. and Robert Eugene Tucker; and Baby Lanier. Lillian was born on May 21, 1927 in Montgomery, Alabama to Louise and J.C. Tucker. She graduated from Kilgore College and was a Kilgore Rangerette from 1944-1946. She attended the University of Texas in Austin from 1946-1949 and met Gus Lanier there. Lillian and Gus married on June 25, 1949 in Kilgore, Texas and moved to Centerville in 1951 for Gus to begin his law practice there. Lillian worked as a secretary for the Leon County Attorney's Office and for the District Attorney's Office of the 12th Judicial District. Lillian was the first elected city councilwoman of Centerville. In 1965, Lillian, Gus and their four children, Gus Jr., Glynda, Lynda and Guy moved to Huntsville, Texas. Lillian worked for the Vice President of Academic Affairs at Sam Houston State University (SHSU) and later in the SHSU Admissions Office. The family moved to Victoria in 1976 and Lillian worked as the Chancelor's secretary at the University of Houston Victoria Campus. After her husband's death in 1984, Lillian returned to Huntsville and worked at Huntsville High School in the Counselor's and Principal's Offices. She retired on January 23, 1989. Lillian was an amazing mother to her four children and a loving grandmother to her many grandchildren and great-grandchildren. She loved to travel and spend time with her loved ones. She was involved in many groups and clubs including the Golden Rule Sunday School Class at First Baptist Huntsville, Huntsville Study Club, Walker County Newcomer's Club, WOW's, Investment Club, Bridge Group, the 4L's Birthday Club and Kilgore Rangerettes Forever. She was extremely compassionate and, even in her later years, selflessly gave to many friends and family members. Lillian touched the lives of countless people and will be deeply missed by all. The family would like to offer a special word of thanks to the doctors, nurses and hospice care workers who made the last few months of her life comfortable and peaceful. A service to honor the life of Lillian Lanier will be held on June 11, 2021 at 10:00 a.m. at the First Baptist Church of Huntsville, 1229 Avenue J, Huntsville, Texas 77340. In lieu of flowers, donations can be made to the Lillian Tucker Lanier Rangerette Scholarship sent to Kilgore College Foundation, 1100 Broadway Avenue, Kilgore, Texas 75662. Donations in her name to a local blood bank are also encouraged.

Lillian Elizabeth Tucker Lanier, wife, mother, grandmother, great-grandmother, and a long-time resident of Huntsville, Texas died on June 9, 2021 at the age of 94, with her family by her side. Lillian is survived by Gus Lummus Lanier, Jr. and... View Obituary & Service Information

The family of Lillian Tucker Lanier created this Life Tributes page to make it easy to share your memories.

Send flowers to the Lanier family.