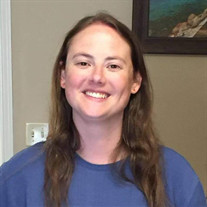 Karen Johnston, née Sumrall, 41 of Willis, TX passed away January 15th, 2021. The last born to Noel and Nancy Sumrall, Karen was born in July of 1979, and was not only the light of her parents’ eyes, but also the thorn in her siblings’ sides, particularly her brother Jeremy. Though they often quarreled as children, nothing is clearer than the love they truly had for each other. Because as fierce a tormentor as each of them was to the other, God forbid anyone else dare speak a cross word about them, because, “Talkin’ like that will get you smacked”, and indeed a few times it actually happened. The same would apply for all Sumrall children, as they are each others’ fiercest and most honest critic, but also their strongest supporter. Karen’s passing leaves a gaping hole in each of their hearts. Karen loved music. She grew up learning and playing piano at a very young age, inspired by the works of diverse artists such as Beethoven, Billy Joel, and the progressive metal stylings of Dream Theater, with a dash of the punk rock attitude of bands like The Ramones. This love of music drove her to join the school band, much like her older brothers. She even formed a short-lived garage band with her brother Jeremy, and it’s safe to say that he was inspired to take up a career in filmmaking because of the documentaries he and Karen made about their band as teens. Karen inherited her love of baseball from her late grandmother Lela, who the kids lovingly referred to as “Auntie”, playing the game as a child, and later attending many Houston Astros games and supporting them as much as she possibly could. Though she was remarkably quiet and studious in school, Karen was not above speaking her mind when the chips were down, and found herself all too eager to raise her voice against bullies who insulted her friends or family, causing many other students to sit up and take notice when she would dig her heels in and stand up to someone for “actin’ a fool”. Karen married William Johnston in 2007, and their marriage brought forth an incredible young man named Zachary. Karen loved Zachary with her entire heart, and nothing brought her more joy and a bigger smile than to see her son growing into the bright and loving young man he is becoming. Zachary inherited the love of baseball from his mother and plays it as often as he possibly can. When Karen and William divorced years later, she was able to find love again with fiancé Michael Cameron. Together, they built a successful accounting firm and were planning a life together. Karen is preceded in death by her grandmother Ida Lela Costello, grandparents Una Jane Sumrall (née Pitts) and David Pascal Sumrall. She is survived by her parents Noel Sumrall and Nancy Sumrall (née Costello), sister Lisa Jacobs (née Sumrall) and her husband Mike Jacobs, brothers Russell Sumrall and Jeremy Sumrall, and her son Zachary Ayden Johnston, niece Sandi Jacobs, nephew Ayric Jacobs, great-nephews Orion and Luke Schaefer, and fiancé Michael Cameron. In lieu of flowers, the family asks that a donation be made in Karen’s honor to the Rita B. Huff Human Society of Walker County (https://rbhhumanesociety.org/, https://www.paypal.com/paypalme/ritabhuff), or the Astros Foundation (https://www.mlb.com/astros/forms/astros-foundation-donation, SVP Community Affairs 501 Crawford Street, Houston, TX 77002 (713-259-8904). Funeral services will take place Monday, January 25th at 10 am at Sam Houston Memorial Funeral Home, with a graveside service to follow. Memorial condolences to the family may be made to www.shmfh.com

The family of Karen Alaine Sumrall Johnston created this Life Tributes page to make it easy to share your memories.