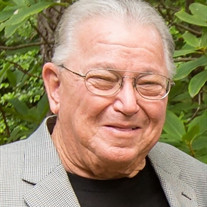 John Martell Sollock Jr., 77, was born in Devine, Texas, on October 2, 1943, and passed away peacefully in his sleep on July 24, 2021, in Floresville, TX. Martell is survived by his wife, Dianne Sollock, Children - Blain Sollock (Rhonda), Shanna Sollock, and John Sollock (Nikki), Sister - Rhonda Rogers, Brother - Bobby Sollock (Marylyn), Sister - Donna McAllister (Walter), Sister - Vickie Ricks (Bill), Sister - Kathy Sollock, Sister - Mary Ann Cargile, Brother - Gary Sollock (Grady), Sister-in-law - Sandra Migl (Dennis), Sister-in-law - Susan Broussard, Sister-in-law - Diane Mitchell, 5 grandchildren, 4 great grandchildren, and numerous nieces and nephews. Martell is preceded in death by parents John Martell Sollock Sr. - father, Elizabeth Jungman Sollock - mother, and Sandra Rihn - sister. Martell was the second oldest of 9 children and began working as teenager to support his family. In 1965, he volunteered to serve in the U.S. Army during the Vietnam War. He was a Combat Engineer with the 16th Engineering Battalion and was honorably discharged after being deployed in support of the war effort. After his time in the military he moved to Huntsville, TX, and spent the rest of his life as an active member of the Huntsville community. For the next fifty plus years, Martell involved himself with community activities and as a General Contractor had a hand in the development of an untold number of construction projects throughout Walker County. Work, along with a strong work ethic, were extremely important to him but so were endeavors that supported the community and his family like the Walker County Fair Association and the Huntsville High School Booster Clubs. When not working, Martell enjoyed hunting, dancing to Ray Price, and drinking W.L. Weller and water. He was quick to say hello, ask how you were doing, and deliver one of his trademark sayings, sayings his family have deemed "Martellisms." Martell spent his last few years living with Alzheimer's. The disease took his mind, and eventually his body, but it didn't take his spirit. Until the very end Martell was a patriot that cared deeply about his family and was always ready to put smile on everyone's face. Visitation will be Thursday, July 29, 2021, starting at 3 pm at Sam Houston Memorial Funeral Home in Huntsville, TX. Rosary will follow at 6 pm. The service for Martell Sollock will be held on Friday, July 30, 2021, at 10:30 am at St. Thomas the Apostle Catholic Church in Huntsville, TX. Memorial donations can be made in Martell Sollock's name to The Alzheimer's Association at www.alz.org. Condolences to family may be made at www.shmfh.com

John Martell Sollock Jr., 77, was born in Devine, Texas, on October 2, 1943, and passed away peacefully in his sleep on July 24, 2021, in Floresville, TX. Martell is survived by his wife, Dianne Sollock, Children - Blain Sollock (Rhonda),... View Obituary & Service Information

The family of Martell Sollock created this Life Tributes page to make it easy to share your memories.

Send flowers to the Sollock family.