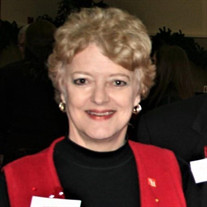 Joey Brand Chandler, age 66, passed away on September 25, 2020. She was born on November 8, 1953 in Dallas, Texas. After graduating from Mesquite High School in Mesquite, TX, Joey attended East Texas State University, now known as Texas A&M University- Commerce, where she graduated with Bachelor of Science and Master of Science degrees. As a college student Joey participated in the Alpha Delta Pi sorority as well as other service organizations. Joey dedicated her professional career to helping college students achieve their college dreams. She worked for East Texas State University from 1977 to 1979 as a School Relations Advisor, and for Trinity Valley Community College from 1979 to 1984 as the Director of School Relations. She then moved to Sam Houston State University where she served as the Assistant Director of Admissions from 1984 to 1992, the Director of Undergraduate Admissions from 1992 to 2005 and Director of the Sam Houston Visitor's Center from 2005 to 2009. During her time at SHSU, she helped the university achieve record enrollment growth, and was often recognized for her leadership, school spirit, and frequent Bearkat orange outfits. Throughout her professional career, Joey served on numerous statewide organizations including the Texas Association of Collegiate Registrars and Admissions Officers (TACRAO), where she held numerous positions. Joey was a faithful servant of God and was a lifetime member of the Church of Christ and attended the Huntsville Church of Christ, where she met her husband King who she married in December 1987. Together, they were actively involved in supporting youth group activities, feeding college students at the Kats for Christ student center, participating in Share Groups, and visiting the sick and shut-ins of the congregation. She and King were active in the launch of Alpha Omega Academy where she also served on the School Board. She also served on the Huntsville Convention and Visitors Bureau Council Board of Directors. Joey is preceded in death by her mother, Evelyn McEuen Richardson, her father W. D. Brand, and sisters, Randi and Lisa. She is survived by her husband of 32 years, King Chandler; son, Jacob Chandler, his wife Lucrecia, their son Jackson; son, Cody Chandler, and his two children, Aiden and Lainey; brother and sister-in-law, Dennis and Lou Fullington; cousin, Kary Ann McEuen; niece, Gena Galvan; sister-in-law, Judy Chandler Cole; nephew, Jeff Fleming, and his wife, Jane-Ann, their two daughters, Chandler and Sarah Catherine. In lieu of flowers, please send donations to Alpha Omega Academy, 3891 State Hwy. 30 West, Huntsville, TX 77340, (936) 438-8833 or the Huntsville Church of Christ, P.O. Box 8237, Huntsville, TX 77340, (936) 295-3884, in her honor. Visitation will be held on Wednesday, September 30, 2020 at 1:00pm and services will follow at 2:00pm at Sam Houston Memorial Funeral Home in Huntsville, TX. Interment will be at Brooke Cemetery in Huntsville. Memorial condolences to the family may be made at www.shmfh.com.

The family of Joey Brand Chandler created this Life Tributes page to make it easy to share your memories.

Send flowers to the Chandler family.