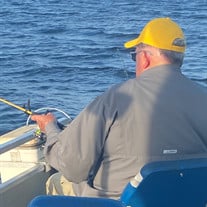 Jerry Lee Hardy 1949-2021 With heavy hearts we announce the passing of Jerry Lee Hardy of New Waverly, Texas. Jerry was called home in the early morning hours of July 31, 2021 due to heart complications. Jerry Hardy was many things, held several careers and titles over the years. But his favorites were, Husband, Dad, Paw-Paw and Uncle Jerry. He was truly an outdoor sportsman at heart, he just belonged outdoors. He fished catfish or crappie, hunted wings or white-tail and was an avid squirrel hunter. He was a pretty fair horsemen too, but his favorite was to fish the coastal region. He was a Proud Texan, Bulldog, and lifetime member of the "Old Buzzards Club". He found much happiness in sharing the outdoors with his family, friends or whoever would go with him. If you knew Jerry, you knew he never met a stranger and if you did not have the chance to know him your truly missed out on a great human being. He will be greatly missed by many. Jerry was proceeded in death by his parents Alvin "Preacher" Hardy and Mary Ethel Hardy. His brothers Lyn Hardy, Jimmy Hardy, Dean Abendroth, sister Joyce Hardy, grandson Sam Wyatt Hardy, and countless aunts, uncles and cousins who might be found in the East Sandy Cemetery on FM 1374. Jerry leaves behind his loving wife Joyce Anne Hardy, brothers and sisters Mike and Grace Hardy, Janice Abendroth and Socorro Hardy. Six children, Chad and Jennifer Lewis, Scott Hedges, Billy Hardy, Eric and Pearl Silvis, Donny and Sara Brown, and Suzanne Hardy. Grandchildren by best account, Tre' and Madison Thibodeaux, Dillon Silvis, Blythe Black, Sydney Brown, Raili Flint, Nikolas Silvis, Skyler Black, Brett Silvis, Tristin Hardy, Kurstyn Lewis, Jeremiah Weaver, Peyton Hedges, Iverson Eli Brown, Hailey Lewis, Corlie Hardy, Laynie Weaver, Leslie Hedges, Zian Brown, Will Cody Hardy, and Kai Brown. Great granddaughter Ivy Rae Silvis. Nephews and nieces, Lance Abendroth, Wesley Hardy, Lee Hardy and Mandy Lightsey along with their families. Extended Family, Paul and Tonya Hungerford and their boys, Michelle Gibson and her girls, Cody Sorensen, Clint and Tracy Sorensen, Rafe and Melanie Dean, and their boys. Let it be known that there are countless others that called him Paw-Paw! A "Celebration of Life" service will be held on Monday, August 9, 2021 at 10:00 am at Sam Houston Memorial Funeral Home with a reception to follow at the Church of Christ in New Waverly, Texas. In lieu of flowers, the family asks for donations to be made in Jerry's memory to MD Anderson at the following website link: gifts.mdanderson.org

Jerry Lee Hardy 1949-2021 With heavy hearts we announce the passing of Jerry Lee Hardy of New Waverly, Texas. Jerry was called home in the early morning hours of July 31, 2021 due to heart complications. Jerry Hardy was many things, held... View Obituary & Service Information

The family of Jerry Lee Hardy created this Life Tributes page to make it easy to share your memories.

With heavy hearts we announce the...