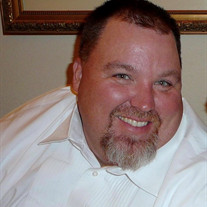 Jerry Claude Davis passed away August 21, 2021 in Houston Texas. He was born June 30, 1972 to Jerry Howell Davis and Joyce Mary Davis in Asheville, North Carolina. Jerry grew up in Tomball, Texas working summers at his dad's cleaners until graduating from Tomball High School in 1990. After graduation he moved to Huntsville to attend Sam Houston State University majoring in Agricultural Business. Jerry then lived around the Austin area where he worked in the IT field and followed the Texas Country music scene. He later turned his ability to fix anything into a career he enjoyed as Building Manager for Aramark. Jerry settled down in Willis Texas in 2007. In 2009 he met and later married Brooke Baxter Davis, the love of his life. Two short years later their family was completed when they welcomed the light of their lives, Ryder Scout. Jerry was a devoted husband and father, always putting his family first in everything he did. He was a proud father and always had an extra sparkle in his eye when he spoke about Ryder. He will best be remembered for his quick wit, sense of humor, and willingness to help others. Jerry was a "man's man". He was an avid hunter, fisherman and Astros fan. Despite some lean years, he was quite possibly the biggest Kansas City Chiefs fan residing in Texas. He also had an affinity for Texas Country music, particularly Robert Earl Keen. When he needed to find God, he always headed to God's masterpiece...the great outdoors. Jerry was preceded in death by his father Jerry Howell Davis. He is survived by his loving wife Brooke Davis and son Ryder Scout Davis, mother Joyce Mary Davis, brother Reggie Davis and wife Monica, brother Steve Davis and wife Theresa, brother Randy Davis and wife Sheron, and brother Scott Davis and fiancé Sandra. He is also survived by a large loving family of aunts, uncles, nieces, nephews, cousins and friends. Rest easy HMR. The family will receive friends Thursday, August 26th from 5-7 and the funeral service will be held at 10:00 am on Friday, August 27th. Both will take place at Sam Houston Memorial Funeral Home in Willis TX. Interment will follow at Smith Memorial Park. In Jerry Davis style, please feel free to wear Jerry's beloved KC Chiefs or Astros gear, or your favorite sports team in honor of his love for sports. In lieu of flowers, the family has requested that donations be made to the Susan G. Komen Foundation for Breast Cancer Research at www.komen.org in memory of Jerry. Memorial condolences may be made to the family at www.shmfh.com

The family of Jerry Claude Davis created this Life Tributes page to make it easy to share your memories.