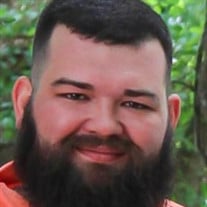 James Leslie Herring III “Trey” passed away following a motorcycle accident on September 27, 2021 at the age of 29. James was born in San Diego California on August 5, 1992 to parents Patricia and the late James Herring Jr. James was an intelligent, loving, strong-willed, no bullshit kind of guy his entire life. If he loved you, you knew it, because he loved hard. James graduated from Montgomery High School in 2010 enlisting immediately into the United States Marine Corp. After his time in the Corp, James returned home where in 2016 met and married his wife Lacie taking on the role of step-father to three wonderful children Ricky, Jonathan and Cheyenne. Shortly thereafter their family of five increased to seven with the arrival of the twins, James and Victoria. James lived a full life in his 29 years and lived life not only to the fullest, but 100% his way. From his first love high-school theater, to the United States Marine Corp, to bull riding, to armor combat with the Houston Outlaws, to his beloved Harley and riding with the Boozefighters MC to a thousand things in between. Above all else, his greatest love was becoming a Daddy. James is lovingly survived by his wife, Lacie; his children, Ricky, Jonathan, Cheyenne, James and Victoria; his mother, Patricia Brent and step-father Edward Brent Jr; his siblings, Kealan Robinson, Jessica Bishop and husband Blake, Dovie Osborne and husband Anthony, Richard Brent, Justin Sanders and wife Alicia; grandparents, Candy Faubion, Rosanne Herring, William “Bill” Daly and wife Dana, Belva Saffel and husband Gerald; and numerous aunts, uncles, cousins, nieces, nephews, and an enormous list of friends. In addition to his father, James Herring Jr, he is preceded in death by grandparents, James and Naomi Herring, and Edward Brent Sr; and uncle, William “Rusty” Daly. The family will receive visitors on Sunday October 3, 2021 from 2:00 p.m. until 4:00 p.m. at Sam Houston Memorial Funeral Home in Montgomery Texas. A Funeral Service celebrating his life will be held Monday, October 4, 2021 at 11:00 a.m. at the funeral home with burial immediately following at New Montgomery Cemetery. You may view a live streaming of the funeral service by clicking the following link: https://client.tribucast.com/tcid/8798403109

James Leslie Herring III &#8220;Trey&#8221; passed away following a motorcycle accident on September 27, 2021 at the age of 29. James was born in San Diego California on August 5, 1992 to parents Patricia and the late James Herring Jr. James... View Obituary & Service Information

The family of James Leslie Herring, III created this Life Tributes page to make it easy to share your memories.

Send flowers to the Herring family.