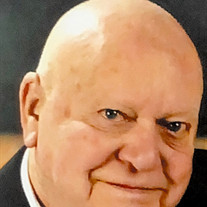 Herbert (Herb) Driver, age 86, was reunited in heaven with his wife of 69 years on Wednesday, January 19, 2022. Herb was born March 30, 1935, in Houston Texas to Fred and Sabra Driver, the first of three children. The family resided on 80 acres on part of what is now the Katy Freeway. When Herb was ten years old they moved to Spring, Texas. Herb attended Wunsche High School where he met Nancy Allen. The two married and created a family which included 5 children, 14 grandchildren, 22 great grandchildren, and 2 great-great grandchildren. With each pregnancy he would say "just another blessing on its way". He was a hard worker and worked for Cameron Iron Works, then began doing acoustical ceiling work. Once his children were grown he went into the acoustical ceiling business together with family, which he continued through retirement. Herb was a perfectionist. Whether it was ceilings, painting, woodwork, or yardwork it was done with excellence. He enjoyed fishing and hunting. His children recall going frog gigging, putting out fishing lines in Cypress Creek after rainfalls, and spotlighting for rabbits. He enjoyed family hunts at the lease and deer hunting in west Texas. He had a beautiful singing voice and would occasionally sing in church. Herb also liked playing dominoes, including moon and 42, with friends and family. He was a Christian and knew Jesus as his Lord and Savior. Herb and his wife were both baptized at Parkwood Baptist Church in 1959. He had a patient and positive attitude, likely to see the lighter side of things in most situations. He liked to laugh and joke and good heartedly pick on his wife Nancy. He thoroughly enjoyed children and having family around. He was also very determined, once he had set his mind to doing something, it was done. He was not concerned with material possessions, he would often say, "I came with nothing and I'll leave the same way, I'm going to enjoy life while I'm here". Herb was preceded in death by: parents, Fred Driver and Sabra Skeeters Driver, wife, Nancy Allen Driver, daughter, Debrah Driver Jones, son Herbert Driver Jr., great-great grandson Axton Varieur, and sister Darlene Driver Jones. He is survived by children, son Mike & wife Brenda Driver, daughter Susan & husband Randy Beken, son Steve and wife Kim Driver, and sister Sandra & husband Don Covington. Affectionately known as "pawpaw" to multiple grandchildren, great grandchildren, and great-great grandchildren. He was the patriarch of the Driver family and will be greatly missed. Visitation will be held on Wednesday, January 26, 2022, from 5-7pm, funeral services will be held Thursday, January 27, 2022, at 2pm at Sam Houston Memorial Funeral Home in Willis, Tx. Officiated by Pastor John Walker with internment to follow. Pallbearers: Cody Driver, Billy Jones, Josh Beken, Roger Varieur, Paul Marrs, Alex Murphy, James Lochner, Sam Jordan

Herbert (Herb) Driver, age 86, was reunited in heaven with his wife of 69 years on Wednesday, January 19, 2022. Herb was born March 30, 1935, in Houston Texas to Fred and Sabra Driver, the first of three children. The family resided on 80 acres... View Obituary & Service Information

The family of Herbert Driver created this Life Tributes page to make it easy to share your memories.

Herbert (Herb) Driver, age 86, was reunited in heaven with his...

Send flowers to the Driver family.