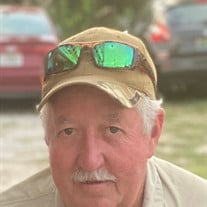 Greg Wright was born February 11, 1957, in Houston, Texas. Surrounded by his family, he left this earth to be with the Lord on November 18, 2021. He was raised by his parents, James and Jean Wright of Huntsville, Texas. He spent the first years of his life in Alaska, soon moving to Vidor, TX. In 1963, he moved to Beaumont where he lived for several years before moving to Huntsville. Greg's first job was at the Yamaha shop on 11th street. In 1972, his parents opened Able Glass & Mirror, of Huntsville. This is where he worked for the next 50 years. He married his wife, Angela Reynolds Wright, of 38 years, in August of 1983. They had two children, Geoffrey and Randi Lynne. Together they raised them in Huntsville, Texas. Geoff and Randi grew up working alongside their Dad in the family business. Greg enjoyed countless hobbies. From riding dirt bikes, to water skiing, hunting, fishing, coaching baseball, ranching, competitive shooting, and just being outdoors. Whatever he put his mind to, he could do. Most of all, Greg loved and adored his family. He put the very best of himself into them and friends. Greg was a mentor to many, even if you didn't think you needed one. His ultimate joy, was when his granddaughters, Kakie and Kaizlee, came into this world. He was known as "Pops" to them. Their favorite thing about Pops was the trinkets he had in his shirt pocket. They enjoyed many ice cream cones and buggy rides at the farm with Pops. They will miss him dearly. Greg is survived by his wife, Angie; son Geoffrey and wife Kayla; daughter Randi Lynne; Brandon Dudley; granddaughters Kakie and Kaizlee; little dog LE; brothers Randy and Jimmy Wright; sister Denice Ward; and many friends and extended family. He was proceeded in death by his parents, James and Jean Wright. Visitation for Greg will be held Monday, November 22, 2021 from 5:00-7:00. Service will be Tuesday, November 23, 2021 at 2:00, at Sam Houston Memorial Funeral Home. Burial will follow at the Wright Family Cemetery, all are welcome. Memorial condolences to the family may be made at www.shmfh.com.

Greg Wright was born February 11, 1957, in Houston, Texas. Surrounded by his family, he left this earth to be with the Lord on November 18, 2021. He was raised by his parents, James and Jean Wright of Huntsville, Texas. He spent the first years... View Obituary & Service Information

The family of Greg Wright created this Life Tributes page to make it easy to share your memories.

Send flowers to the Wright family.