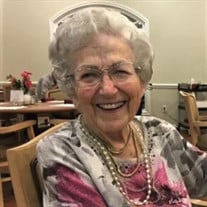 Gerry was born in Palestine, TX May 3, 1919 to Beulah and Willoughby Carter. She was welcomed into the arms of her Heavenly Father April 15, 2021. Gerry died 2 ½ weeks shy of her 102nd birthday. She spent her life in Huntsville and made an impact on the lives of many. She attended a revival in Dodge when she was a teenager (1930’s) and gave her life to Jesus and thus began a legacy of faith for her family. She married Floyd Harding and they were married for over 50 years. They were the owners of Walker County Hardware. They had 2 children Lynne and Jimmy. Gerry spent her time taking care of her home and her children. She and Floyd travelled a lot and spent time in almost every state and went to Europe. When her kids were grown and she was an empty nester, she had a lot of fun! She was an avid bowler and was in a weekly bowling league and always went to the National Bowling tournament in Las Vegas where she would come home with medals and money that she won gambling. For many years, she would hook up the boat and go fishing with her friend every week. She was in the Huntsville Garden Club and loved creating beautiful flower arrangements. She hunted. She painted ceramics. She and Floyd went dancing. She was a huge reader. She grew flowers and vegetables. She got into the stock market in her 70’s and started collecting coins. Later in life she played canasta and bridge in different groups. She taught Sunday School, and she led the Benevolence group at First Baptist. She was the best grandmother. She was full of energy and laughs and was fun to be around. She took her grandkids bowling, fishing, served up fish fry’s, took them hunting, took them antique hunting, took them berry picking and taught them to love berry cobbler and pimento cheese. She always had some craft to keep them busy when they stayed with her. She did a lot these same things with her great grandchildren as well. She killed a snake in her back yard when she was 89! She had a smile that would light up the room and she loved her family. She will be missed. Gerry is preceded in death by her husband’s Floyd Harding and Ralph Davis, her daughter Lynne Reynolds and grandson Mark Costilow as well as sister Margie and brothers Billy and Kenneth. She is survived by her son and daughter-in-law Jimmy and Judi Harding, her grandson & wife Sean & Sandee Harding, granddaughter & husband Donna & Dave Wolski and great grandchildren Cooper, London & Arden Wolski, and Colten and Sayler Harding. Funeral services for Gerry will be held at 10:00 AM on Saturday, April 17, 2021 at Sam Houston Memorial Funeral Home in Huntsville, Texas, with Reagan Cooksey officiating. Burial will follow at Brooke Cemetery on FM 980. Memorial condolences to the family may be made at www.shmfh.com.

Gerry was born in Palestine, TX May 3, 1919 to Beulah and Willoughby Carter. She was welcomed into the arms of her Heavenly Father April 15, 2021. Gerry died 2 ½ weeks shy of her 102nd birthday. She spent her life in Huntsville and made an impact... View Obituary & Service Information

The family of Gerry Harding Davis created this Life Tributes page to make it easy to share your memories.