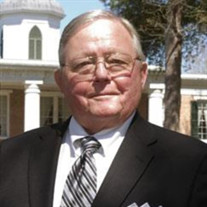 George D. Miles, Jr, 83, loving husband, father and grandfather passed away on March 23, 2022. He was born to George and Mildred Maltby Miles on June 26, 1938 in Jacksonville, Texas. He is preceded in death by his wife Beth, and parents George and Mildred Miles. He is survived by son Scott Miles and wife Sheri of Huntsville, Texas; granddaughters Kathryn Altom and husband Marshall, of Huntsville, Texas; Emily Eberle and husband Matt, of Hays, Kansas; stepsons Rusty Cosby and wife Michelle of Kerrville, Texas; and Randy Cosby of Crockett, Texas; great-grandchildren, Walker Altom, of Huntsville, Texas; and Londyn, Greyson, and Owen Eberle of Hays, Kansas; sister Louann Miles of Houston, Texas; and niece Jordan (J.R.) Carson. In addition, he is survived by many other family members and friends who loved him. George graduated from Sam Houston State University in 1961 with a Bachelor of Science in Journalism. He then attended Southwestern Graduate Banking School at Southern Methodist University. The majority of his career was spent in the banking industry, retiring as executive vice president for First National Bank of Huntsville after 22 years before returning to serve as marketing coordinator on a part-time basis. He served as president of the SHSU Alumni Association in 2006 and was directly involved in the origination of the Alumni Garden, the designation of the "Presidents Tree," the completion of the Bell Tower, the restoration of the Old Main pipe organ and its installation in the Peabody Library, and the initial establishment of regional alumni clubs that led to greater participation in the association. He also initiated an alumni committee that organized the successful movement to prevent any possible name change for SHSU. George's work within the university and Huntsville communities was vast. He received the Huntsville Citizen of the Year Award in 2007 and February 21, 2008 was proclaimed George Miles Day in the City of Huntsville. He also received the SHSU Alumni Association Service Award in 2008, the Edwin G. Sandhop Spirit of Huntsville Award in 2013, the Huntsville-Walker County Chamber of Commerce Mance Park Lifetime Achievement Award in 2016 and was named a Rotary International Paul Harris Fellow in 2014. In 2018, he was named to the Wall of Honor in the SHSU College of Humanities and Social Sciences. In addition to serving as chair of the board for the Huntsville-Walker County Chamber of Commerce, Miles also served as founding chair of the College of Humanities and Social Sciences Advisory Board, as a member of SHSU's President's Circle, the Executive Leadership Council, Sam Houston Memorial Museum Board and the Mass Communication Advisory Board. Miles' love for SHSU knew no bounds as he was always seen wearing orange and even named his cocker spaniel, Sammy. His favorite hobby was volunteering for the community. His funeral service will be Tuesday, March 29, 2022 at 2 p.m. at Huntsville Church of Christ, 3737 Hwy 30 West, Huntsville, Texas. Visitation with the family will be held prior to the service at 1 p.m. George will be laid to rest at Brooke Cemetery in Huntsville. In lieu of flowers, please make donations in George's memory to the Sam Houston State University Alumni Association, or the charity of your choice. Memorial condolences may be made to the family at www.shmfh.com.

George D. Miles, Jr, 83, loving husband, father and grandfather passed away on March 23, 2022. He was born to George and Mildred Maltby Miles on June 26, 1938 in Jacksonville, Texas. He is preceded in death by his wife Beth, and parents George... View Obituary & Service Information

The family of George Delphia Miles, Jr. created this Life Tributes page to make it easy to share your memories.