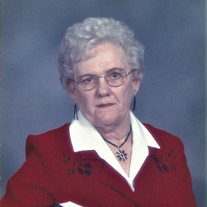 Nell Quisenberry was born Frances Nell Wells on November 17, 1935. She joined her beloved husband, James Lawrence Quisenberry, in Heaven on January 2, 2022. Nell grew up on a cotton farm on the Texas Panhandle. She met James not far from there and they were married in 1954. Shortly after the birth of their first child, Deborah, James re-entered the United States Air Force and their lives changed completely. Throughout his time in the service, they not only lived in several U.S. states, they also traveled throughout Europe and lived in Canada (where their second child, Brad, was born), England and Germany. James retired in 1979 and they settled in Austin, Texas, where they lived until his death on June 7, 1999. Subsequently, Nell moved to Huntsville, Texas to live out the rest of her life. Along with raising a family (and later helping to raise her grandchildren), Nell worked many and varied jobs, including as a head cashier of the on base Exchange at Ramstein AFB, Germany and assisting with the upkeep of the residents' records in an assisted living facility in Austin. Nell had many hobbies throughout her long life, including sewing, embroidery, and cross stitch. Her favorite hobby was singing in her church choir. She is survived by her daughter, Deborah Pence, and son, Brad Quisenberry and also her grandchildren Christopher Shurr, Jennifer Sheets (and husband Michael), Brian Quisenberry (and wife Tana), Victoria Quisenberry and Jacob Quisenberry, and two great-grandchildren, Alexander Sheets and Lorelei Quisenberry, as well as numerous nieces and nephews. Her family would like to thank her niece, Yvonne Blair and her husband Gene for all of their support and help during the last two months. Visitation will be held on Friday, January 7, 2022 at 12:30 pm at Sam Houston Memorial Funeral Home in Huntsville, TX, with a funeral service beginning at 1:30 pm. Nell will be laid to rest with her husband at Fort Sam Houston National Cemetery on January 20, 2022. Memorial condolences may be made to the family at www.shmfh.com. To view a livestream of the funeral service please click on the link below: https://client.tribucast.com/tcid/6130717186

Nell Quisenberry was born Frances Nell Wells on November 17, 1935. She joined her beloved husband, James Lawrence Quisenberry, in Heaven on January 2, 2022. Nell grew up on a cotton farm on the Texas Panhandle. She met James not far from there... View Obituary & Service Information

The family of Nell Wells Quisenberry created this Life Tributes page to make it easy to share your memories.

Send flowers to the Quisenberry family.