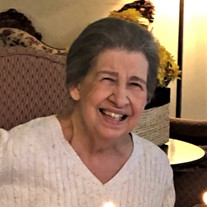 Fanella Wolf Davis left us to be with the Lord on Sunday January 9th, 2022. She was born the 15th day of November in 1938 to William Charles Wolf and Lila May Folsom Wolf. She was the youngest of their four daughters. Her parents registered her as a member of the Choctaw Nation, and made sure she knew her family's background. She would later pass this down to future generations. She graduated Oklahoma University, and worked as a bank teller in Oklahoma City when she met the love of her life, Al J. Davis. [9/4/1933-1/20/2013] The couple was married on the 23rd day of January, 1959. They decided to go where Al's work took him, and move from Oklahoma City, OK to Houston, TX. She worked full time managing books for four different pharmacies in her area, and was also a Tupperware sales representative. Fanella was an extremely nurturing, and supportive mother to Allan Joseph Davis, and Cyndi Lynn Davis. She went above and beyond as a team mother for little league, den mother in boy scouts, and brownie troop leader for girl scouts as well. Her children adored the soft spot she had in her heart for all the wounded/abandoned variety of animals they brought home needing love and care. In her free time, she enjoyed doing volunteer work for the American Heart Association, the Houston Zoo, and did many other things that allowed her to lend a hand for a good cause. She was also a Sunday School teacher for many years sharing the love of Jesus with young minds. Fanella is survived by her children Allan Davis, and Cyndi Davis, and partner, Brian Finch. Grandchildren Andrew Davis, Michael Davis, wife Raylynn, Clayton Smith, Amanda McMillian, and husband Don. Great-Grandchildren Hayleigh Davis, Dallan McMillian, Porter Davis, Beau Davis, and Alarie McMillian. As well as many other distant family members. Fanella is preceded in death by her Husband, Al Davis. Her sisters Dorthy Williams, Lela Bullard, and Delthia Patterson. As well as her Great-Granddaughter Kimber Davis. Visitation will begin at 9:00 am on Monday, January 17, 2022 at Sam Houston Memorial Funeral Home in Huntsville, TX, with services following at 10:00 am. Interment will follow at Brooke Cemetery on FM 980. Memorial condolences may be made to the family at www.shmfh.com.

Fanella Wolf Davis left us to be with the Lord on Sunday January 9th, 2022. She was born the 15th day of November in 1938 to William Charles Wolf and Lila May Folsom Wolf. She was the youngest of their four daughters. Her parents registered... View Obituary & Service Information

The family of Fanella E Davis created this Life Tributes page to make it easy to share your memories.

Fanella Wolf Davis left us to be with the Lord on Sunday January...