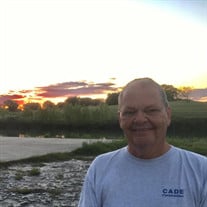 Edward Jackson Cade Jr. was born February 12, 1950, in Houston, Texas, and died March 10, 2021, in San Antonio, Texas. Jack grew up and attended school in LaPorte, Texas on the bay. He enjoyed fishing, water skiing, and bonfires on the beach. In 1968, Jack graduated from La Porte High School, where he met and dated Paula Whitney. Jack attended The University of Texas in Austin, and graduated in 1973 with a Bachelor of Science degree in Architecture. He and Paula married while students at U.T. in 1970. After graduation, Jack and Paula moved back to Houston where Jack worked for Pierce, Goodwin, Flanagan Architects. They attended St. Luke’s United Methodist Church, where both of their children were baptized. Jack had a long career in Houston working at Gensler and Associates, C.R.S., along with other firms, and was a founding partner in Planning, Design, and Research Corporation. In 1990, Jack and Paula moved their family to Kingwood, Texas, where they became members of Kingwood United Methodist Church. At K.U.M.C., Jack was chairman of missions, sang in the choir, and was a devoted member and past president of the Agape Sunday School class. He served many years on the Conference Committee for Breaking the Silence. Jack also volunteered with Private Sector Initiative repairing homes in the Houston area, as well as volunteering with U.M. ARMY. He founded Cade Construction Company and changed from a career in interior architecture to design and building. Jack loved his family and spent many years caring for both of his parents to the end of their lives. He brought fun and adventure to all who love him. We love you Jack, Dad, and Papa and will miss you so much. The last six weeks of his life, Jack was cared for by the wonderful nurses and doctors at Methodist Texsan Hospital, in San Antonio. We thank you for the compassion and love shown to our family. Jack was preceded in death by his grandparents, Floyd and Bethal McAdams of Huntsville, Texas, his father, Edward Cade of LaPorte, his mother, Martha Fetterman, and his step father, Ray Fetterman of Clear Lake. He is survived by his wife of 50 years, Paula, his daughter, Amy Mantooth and husband Chris, his son, Alan Cade, five grandchildren, Allison, Ashlynn, Kevin, Kaiden, and Noah Mantooth of San Antonio, his sisters, Ellen Edwards and husband Eddy of England, and Terri Harrell and husband James of League City, brother-in-law Bill Whitney and wife Linda of Florida, sister-in-law Judy O’Day and husband Michael of Kingwood, sister-in-law Marty Neighbors and husband Bradley of Spring, his nieces Laurie Collins, and Kat Slosarek, nephews Cade Siemers, Lloyd Edwards, Cody Harrell, William Whitney, and Jamie Huckabee, as well as many great nieces and nephews. A memorial service for Jack will be held, Saturday, March 27th, at 10:00AM, at Kingwood United Methodist Church, 1799 Woodland Hills Blvd, Kingwood, Texas 77339. A private burial will be in Huntsville, Texas, at the McAdams Cemetery (77320). In lieu of flowers, donations may be made to Kingwood United Methodist Church’s music or missions ministries. Kingwoodumc.org / 281-358-2137 Condolences to family may be made at www.shmfh.com.

Edward Jackson Cade Jr. was born February 12, 1950, in Houston, Texas, and died March 10, 2021, in San Antonio, Texas. Jack grew up and attended school in LaPorte, Texas on the bay. He enjoyed fishing, water skiing, and bonfires on the beach.... View Obituary & Service Information

The family of Edward Jackson Cade Jr created this Life Tributes page to make it easy to share your memories.