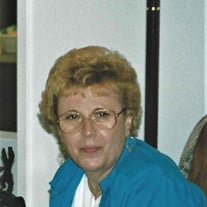 Edeltraud (Edie) Loosier Burton, 76, passed away on August 3, 2021 at her home in Spring, TX. Known by friends and family as Edie Burton, she was born on January 20, 1945 in Steinau an der Oder, Germany, to Guenther and Kathe Pohl. Edie grew up in Germany, post World War II and graduated from High School in Frankfurt-Griesheim in 1961. Shortly after that, she met the love of her life Thomas (Tommy) Oscar Loosier who was stationed in Germany while he was serving in the United States Army. He brought her to America and they got married in Bryan, TX when she was 18 years old in 1963. They had a bouncing baby boy Jason Shane Loosier 2 years later. After the devastation of his early death when Tommy was only 39 years old, Edie began her career in collections to support herself and her then 15 year old son Shane. In 1986, she married her second husband Edward (Ed) Charles Burton and lost him in 2003. Edie had a passionate love for animals and enjoyed raising Longhorns at her ranch with Ed. She always made sure they had plenty of the finest birdseed for all the birds, and peanuts for the squirrels. She could not pass by a stray animal in need and nursed many cats and dogs back to health and spoiled them with the finest foods and vet care, without hesitation. Through the years, she enjoyed many visits to Germany to spend time with family there until her health prevented her travel. The last decade was spent traveling to Houston with her daughter-in-law Madilene at the wheel, escorting her and helping her interpret doctors visits and mulitple surgeries while assisting in her care. Edie was very proud of her son and 3 grandsons and would do anything for them. Edie is survived by Shane Loosier - son, Madilene Loosier - daughter-in-law of Huntsville, TX and 3 grandsons-Tommy Loosier, Brandon Loosier and Dillon Loosier. Lilo Doebrich-Sister- of Germany , as well as several nieces and nephews in Germany. Edie is preceded in death by Guenther Pohl- father, Kathe Pohl - mother, Thomas (Tommy) Loosier-husband, Edward (Ed) Charles Burton-husband, and Lota Doebrich- brother-in-law. Visitation will take place on Thursday August 12, 2021 at 5:00 PM-7:00 PM at Sam Houston Memorial Funeral Home - Huntsville. A graveside service for family will follow. Burial will be at Mayes Addition of Oakwood Cemetery, Huntsville, TX. In lieu of flowers, donations can be made to the American Diabetes Association or Sjogren's Foundation.

Edeltraud (Edie) Loosier Burton, 76, passed away on August 3, 2021 at her home in Spring, TX. Known by friends and family as Edie Burton, she was born on January 20, 1945 in Steinau an der Oder, Germany, to Guenther and Kathe Pohl. Edie grew... View Obituary & Service Information

The family of Edie Loosier Burton created this Life Tributes page to make it easy to share your memories.

Send flowers to the Burton family.