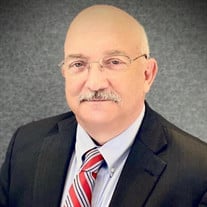 On Wednesday February 9th, 2021, Eddie B. Hutchison III went to be with his lord and savior at the age of 58. Eddie, growing up known as lil’ Eddie, was born September 5th, 1962 in Liberty, Texas to Eddie B. Hutchison Jr. and W. Jene. After graduating Trinity High School, Eddie received his Associate degree in Civil Engineering at TSTI. Eddie returned home to Trinity to help his father with the family company, Hutchison Construction. The passing of Eddie’s father and the birth of his daughter Laci, rekindled Eddie’s dreams to follow his father’s footsteps and pursue Law Enforcement. Eddie started his LEO career with the Harris County Sheriffs Department in 1992, after a brief time with the Houston Metro Transit Division he accepted a position with Walker County Sheriffs Department. While serving Walker County, Eddie submitted his application to Texas Department of Public Safety. Eddie would graduate from TXDPS academy at the age of 33, where he began a distinguished career, just over 22 years that included, Texas Highway Patrol, Criminal Investigations Division and Polygraph Examiner. Eddie retired from TXDPS on August 16th, 2018. Retirement would be short lived after when he moved from League City, Texas with his wife Janet back to Huntsville, Texas to be closer to friends, family and his two grandsons Keaton and Luke LeNorman. Eddie returned to the WCSO and finally the Walker County District Attorney’s office where he served as an investigator until his death. From an early age Eddie and his father shared a passion and hobby for cars, this was a hobby that Eddie embraced his entire life and shared with his wife, daughter, grandsons, and any random person who was driving something he liked. In addition to fast cars, Eddie had a passion for good music, fast cars, and had the impeccable ability to break anything mechanical that was working just fine. Eddie enjoyed spending time with family and friends and was elated to have built a new house next to his best friend and cousin Frank Robinson. Frank and Eddie often spoke of the future and how they would spend their days taking their kids and grandkids on new adventures and share their love of the outdoors, classic cars and tractors. Eddie was preceded in death by his father, Eddie B. Hutchison Jr., his brother Walter Scott Hutchison, his great grand parents Walter Thomas Riggs and Ida Mae and beloved dog Kaci. Left to cherish his memory are his mother Jene Hutchison, wife Janet, daughter and son in law, Laci & Ryan LeNorman, Grandchildren Keaton & Luke LeNorman, Brother & Wife, Bradley & Ruth Lynne Hutchison, Nephews: Tyler Hutchison (wife Kaylee), Austin Hutchison (wife Jenna), Great nephew & niece Nathan & Addison, along with his cousin Frank Robinson & daughter Grace. As well as a host of aunts, nephews, cousins, friends and first responder family. Eddie B Hutchison III, loved by many, disliked by some and hated by few. A distinguished public servant with a hero’s heart. The family extends their heartfelt gratitude and love to the TX DPS, Walker County Sherriff’s Office, Walker County Constables, Huntsville Police Department, Huntsville Fire Department, Walker County EMS and the Walker County District Attorney’s office for their support, love, and prayers. In lieu of flowers, the family has requested donations to Eddie’s place of prayer, Faith Lutheran Church, in his name. www.faithhuntsville.org Luke 10:20 “Rejoice in the Lord because your names are registered as citizens of heaven.”

The family of Eddie B Hutchison created this Life Tributes page to make it easy to share your memories.

Send flowers to the Hutchison family.