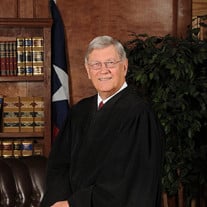 Our dear husband, father, and friend, Judge Donald "Don" Kraemer, passed away on Wednesday, January 19, 2022, surrounded by family. He was a wonderful husband, father, father-in-law, grandfather, brother, uncle, and Christian friend who meant the world to us and will be greatly missed. Born in Rosebud, Texas on May 18, 1945, to Benard and Ethel Kraemer, Don became a child of God through Baptism on June 17, 1945 and re-affirmed his faith through Confirmation on August 17, 1958. Don and his older siblings, Ray and Carol were raised on a cotton farm in Rosebud. As a young boy having to help work the fields and pick cotton, it didn't take him long to realize that was not going to remain his career choice! Don graduated from Rosebud High School in 1963 as class valedictorian. He graduated from Texas Lutheran University in 1967, where he met the love of his life, Sylvia "Sibi" Kraemer and married her in 1966. They formed a beautiful partnership lasting over 55 years that included raising two children, Brett and Erika, and shaping the lives of 5 adoring grandchildren. He graduated from The University of Texas School of Law in 1972, having also served in the United States Army Infantry from 1969 to 1971, including a tour of duty in Vietnam from 1970-1971. Kraemer, as many affectionately called him, was a resident of Huntsville/Walker County since 1972. Since coming to Huntsville, he and Sibi have been members of Faith Lutheran Church where he served in many leadership roles including Congregational President and Elder. He began a long and distinguished legal career with the Staff Counsel for Inmates at TDCJ. In 1974 he joined then District Attorney Jerry Sandel as Deputy District Attorney. Making a career change at that time gave Don the opportunity to be involved in the prosecution of several defendants connected to the Carrasco siege at the Walls Unit which has had a lasting impact on the Huntsville community and Don's legal practice. In 1976 Don joined the late Jack Haney and the late Martin Colley in private practice with the firm of Colley, Haney and Kraemer. In 2008 Don was elected judge of the 12th Judicial District Court which includes Walker, Grimes and Madison counties. He loved the law and the bench; and would have continued but for mandatory retirement in December 2020. Don was known as a fair-minded person and described by friends and colleagues as "a fantastic judge and wonderful lawyer" who "made a profound difference". In addition to practicing law for 35 years, community service was a driving force in Don's life and career since moving to Huntsville. He was elected to serve two terms on the HISD Board of Trustees. Don coached the Huntsville High School Mock Trial team for 10 years. He served on the board of the Huntsville/Walker County Chamber of Commerce, twice as president, as well as a member of the Tourism Council. He was appointed to serve on the Board of Child Protective Services and Tri-County Behavioral Healthcare. He served on the Advisory Board of American Bank and East Texas National Bank of Palestine. He was a member of the State Bar of Texas and the Walker County Bar Association where he has been president and vice-president. This passion for leadership and service was recognized in 2015 with the Mance Park Lifetime Achievement Award. Kraemer loved spending time with his grandchildren, traveling, camping, playing "42", trout fishing and hunting. One of his most cherished privileges was being the "lease boss" for the Bedias Sportsman's Club for almost 40 years where he made some of his closest friendships. Those who knew and loved Don have described him and will remember him as: "Tremendous asset to Huntsville and Walker County for many years" "Larger than life" "Truly made the world a better place" "A truly incredible man" "A kind and loving man" "A positive influence in my life" "Judge Kraemer made a profound difference, and the country is a better place because of him" "The Big Dog" "A man of strong faith" Don was preceded in death by his father - Benard Kraemer, mother - Ethel Kraemer and sister - Carol Smithe. He is survived by his wife of 55 years - Sibi, their two children - Brett Kraemer (wife Rachel) and Erika Kaufman (husband Tim), 5 grandchildren - Andrew Kraemer, Julia Kraemer, Hayden Kaufman, Jace Kaufman and Parker Kaufman, and his brother - Ray Kraemer. A memorial service and reception to celebrate Judge Don Kraemer's life will be held on Saturday, February 5, 2022, at 11:00 AM at Faith Lutheran Church, Huntsville, Texas. Please feel free to wear colorful or thematic attire to represent your personal relationship with Kraemer. Out of respect for one another during this time, we ask that those attending wear a mask indoors. The service will be livestreamed on YouTube.com. Search "Faith Lutheran Church Huntsville Texas". In lieu of flowers, the family would ask you to consider Memorial donations made in Don's name to: Texas Lutheran University's Benard and Ethel Kraemer Scholarship at 1000 West Court Street, Seguin, Texas 78155 or at www.tlu.edu/give-to-tlu Faith Lutheran Church and School at 111 Sumac Road, Huntsville, Texas 77340 or at www.faithhuntsville.org/give Memorial condolences may be made to the family online at www.shmfh.com

The family of Judge Don Kraemer created this Life Tributes page to make it easy to share your memories.

Send flowers to the Kraemer family.