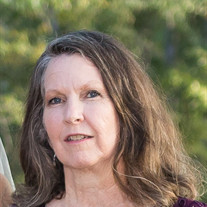 Debra Jean Dickey Hardy was born March 27, 1952 to Darrell Dean Dickey and Jimmie Sue Parker Dickey in Huntsville, Texas. Surrounded by her family, Debra went to be with the Lord on Sunday, November 14, 2021. Raised by her loving parents, she spent most of her life in Huntsville, TX, and also lived and attended school in Madisonville, TX for several of her grade school years. She graduated from Huntsville High School in 1970 and followed at Sam Houston State University earning a Bachelor of Arts degree in Home Economics in 1975. She married her husband of 47 years, Mark L. Hardy, on September 28, 1974. They lived, built businesses, and raised a loving family all while continuing to reside in Huntsville. Debra began her career in education teaching Kindergarten for Cleveland Independent School District, loving her students and colleagues. She resigned to raise her own two children with all of her focus. She resumed teaching years later at Mance Park Middle School and last taught at Gibbs Pre-K Center where she retired in 2017. She loved anything that could get her outdoors and had a huge appreciation for trees. She loved growing her own, especially oaks from acorns. She picked up acorns anywhere she traveled, and planted too many to count. She left a legacy, planted by her hands, for her children and grandchildren to watch grow. Debra devoted her life to the care of her children and grandchildren and did so with a joyous heart. The highlight of her life was becoming "DeeDee" to her grandchildren. She was blessed with her first and only grandson in 2017, and later with triplet granddaughters in 2020. She spent countless hours teaching, loving, and feeding all her grandkids - DeeDee was always on duty! She had an immense love for all of her family, brothers, cousins, in-laws and all, and was proud of them. Her salvation in Jesus Christ and her family were most important. She was preceded in death by her parents, Darrell and Sue Dickey of Huntsville; grandparents Clarence and Ruby Parker and Ernest and Edna Dickey of Huntsville; aunt Ernestine Sloan of Huntsville; and her in-laws Marion Lindsey and Dorothy Nance Hardy of Huntsville, sister-in-law Malynn Hardy Reese of Conroe, and brother-in-law Robert Gary Hardy of Huntsville. She is survived by her husband, Mark Lacey Hardy of Huntsville; son Cole Rankin Hardy and grandson Bodie Lynne Hardy of Franklin; daughter and son-in-law Lacey Lynne and Lance Marshall and granddaughters Leddy Nance Marshall, Kat Musick Marshall, and Davy Pride Marshall of Huntsville; her two brothers and sister-in-laws Steve and Carole Dickey of Centerville and Grant and Barbara Dickey of Huntsville; and numerous other cousins, nieces and nephews. Funeral services will be Friday, November 19th at 10:00 AM at Sam Houston Memorial Funeral Home. The family will receive visitors from 8:00-10:00 AM prior to the service. In lieu of flowers, the family requests donations be made to the Arbor Day Foundation so that her love for trees will continue to grow. Memorial condolences to the family may be made at www.shmfh.com.

Debra Jean Dickey Hardy was born March 27, 1952 to Darrell Dean Dickey and Jimmie Sue Parker Dickey in Huntsville, Texas. Surrounded by her family, Debra went to be with the Lord on Sunday, November 14, 2021. Raised by her loving parents, she... View Obituary & Service Information

The family of Debra Jean Hardy created this Life Tributes page to make it easy to share your memories.