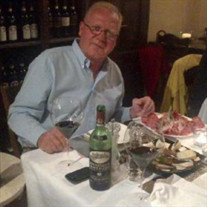 David Spear passed away suddenly in his sleep at his home in Bentwater on Friday 7th May, 2021 as a result of blood clots in his lungs following a recent foot reconstruction surgery in the previous month. He felt no pain. Born in Cambridge, MA on 15th August 1956 to Horace and Barbara Spear (both deceased). David was the baby of the family who kept everyone on their toes. His hobbies were without limit and was into anything and everything! He loved to learn how to fix things. Cars, houses, appliances… limitless! David had so many stories, he lived an exciting life and his youth was in a time without social media – perhaps a good thing that there was no evidence! David fell in love with boats as a child and they were a constant in his life, even more so in the last 10 years where he quickly moved from slow fishing boats to very fast carbon fiber boats. He held on to his fishing boat 38’ Egg Harbor called “Per Diem”. Following his treatment for throat cancer in 2010, the first fast boat was purchased. A 1997 38’ Cigarette Top Gun called “Delirious”, however, his wife Lisa liked to call the boat “Christine” as every time she was in it, she got hurt. He used this boat mainly in Cape Cod, Florida and to an unbelievable trip to the Bahamas Christmas 2013. He sold “Delirious” to a gentleman in Spain and purchased his 2011 44 SL Outerlimits called “Booty Call”. With a strong influence from his wife this quickly was changed to “The Sleeper” in August 2015. Mainly used in Florida and to Cuba for the first Powerboat Poker Run through Florida Powerboat Club. “The Sleeper” tested his passion for fixing things, but he loved it. He did put it up for sale last year in Rhode Island (still to be sold). Still in possession of the fishing boat and the Outerlimits, he couldn’t wait and bought yet another boat…even faster and slicker. The 2011 40’ MTI with Mercury twin 1350, 100% Carbon Fiber, “Distant Thunder”. David adored it and although it went top speed of 180, he was sure it could go further and had the engines repowered into 1350/1550/1750 which would give him a top speed of 200 mph. Unfortunately, David never got to fully throttle the boat due to his foot surgery. Other than his beloved boats, and most importantly, David loved his wife Lisa. The bond between them was something many people don’t get to have. They were blessed to have found each other and to be together. Their unconditional love was greater than their individual stubbornness. Both fire signs and their penchant for being right was strong… but their love was stronger, and it prevailed. David was able to be his true self with Lisa. His vulnerable self. He knew that she would take care of him and she knew his love was everlasting. David and his sister Barbara had a special relationship and if ever you were graced by them both in the same room it wouldn’t be long before your belly hurt from laughing at their sibling rivalry and differing personalities. David loved his sister very much. David’s entire family, bloodline and through marriage, are all devastated by his passing and feel cheated of future memories that were meant to be. He was looking forward to taking his Grandson Elias for summer vacations, touring the US in an RV and teaching him how to fish in the Ocean. David has been taken too soon. He had much more life to live and plans to fulfill. He was strong, he had battles and this ending almost seems too simple. David is survived by his wife Lisa, his two step-children, Spencer and Brier, his three grandchildren Elias, Elsie and Charlie, his sister Barbara and brother-in-law Stephen and their three children, Jodi, Jason and Justin and his mother and father-in-law Elizabeth and Edward May he rest in Eternal Peace. Until we meet again. To view a live stream of this service, please click on the following link: https://client.tribucast.com/tcid/2041782351

David Spear passed away suddenly in his sleep at his home in Bentwater on Friday 7th May, 2021 as a result of blood clots in his lungs following a recent foot reconstruction surgery in the previous month. He felt no pain. Born in Cambridge,... View Obituary & Service Information

The family of David Brian Spear created this Life Tributes page to make it easy to share your memories.

David Spear passed away suddenly in his sleep at his home in...

Send flowers to the Spear family.