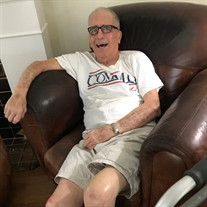 David Arthur Duesing age 75, loving husband, father, grandfather, brother, and uncle was called to be with Jesus Sunday, March 13, 2022 after a courageous battle to regain his health after falls resulting in brain bleeds culminating with Covid. He is now pain-free and happy. He was born in Taledo, Ohio on October 2, 1946 to Charles Duesing and Marguerite Perkins Duesing. David graduated from high school in Austin, Texas and joined the U.S. Navy in 1966, served six years in Submarines during the Vietnam War Era. He began civilian life at the Austin Power Plant; met and married "the love of his life", Sally Hammonds. They moved to Houston where he worked at Petro Lite, and their daughter Whitney was born. David and Sally would drive to Huntsville to visit Sally's mother and liked it so much they moved there and then their second daughter Natalie was born. David worked for Brown Oil Tool and later started his own business, D & D Services. He eventually closed the business to be a one-man operation. Cleaning Dr. Monday's offices on 11th, and Veterinary offices to name a couple. He drove clients to/from Houston airports and cleaned and maintained client's homes and yards. He was at their beckoned call. He was a blessing to many in Huntsville. He was an active member of St. Thomas the Apostle Catholic Church in Huntsville, volunteering for whatever was needed. He delivered food stuffs donated for the less fortunate to the Good Shepherd Mission. In addition, he contributed countless hours and miles to community involvement, serving his church and others through participation in the local St. Vincent DePaul Society Conference. One of his main missions in life was to serve the Lord through others. David was a blood donor for years and when he was no longer able to give his blood, he would set out the many blood drive signs throughout the City, for Esther Cousins every month. Left to cherish his memory is his wife Sally of 43 years, daughter Whitney and son-in-law George Peek; granddaughter Amelia Peek; sister and husband, Marguerite and Tom Duesing; brother and wife, John and Judy Duesing; sister-in-law Bonnie Duesing; numerous nieces and nephews in Austin and beloved fur babies. David is preceded in death by his parents Charles and Marguerite Duesing, daughter Natalie Marie Duesing and brother Charles Duesing. Services for David will be on Tuesday, March 22nd at 11 am at St. Thomas the Apostle Catholic Church, 1323 16th St., Huntsville, Texas. In lieu of flowers, donations may be made in David's memory to St. Vincent de Paul Society, c/o St. Thomas the Apostle Church, 1603 Ave N, Huntsville, Texas or the charity of your choice. Memorial condolences may be made to the family at www.shmfh.com.

David Arthur Duesing age 75, loving husband, father, grandfather, brother, and uncle was called to be with Jesus Sunday, March 13, 2022 after a courageous battle to regain his health after falls resulting in brain bleeds culminating with Covid.... View Obituary & Service Information

The family of David Duesing created this Life Tributes page to make it easy to share your memories.

Send flowers to the Duesing family.