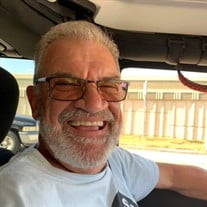 DANIEL “KENT” LEHENBAUER Kent died on January 20, 2021 barely a month after contracting Covid-19. Born the youngest of 6 children to Mary Eugenia (Tuley) and A.H. (Johnny) Lehenbauer in Hannibal, Missouri on February 14, 1959. His Valentine birth-date forecast his personality. In 1985 Kent eloped with the love of his life, Cindy Courtney. That elopement became one of the many entertaining stories Kent shared freely and joyfully with friend and stranger. Who has their car towed while being married? Kent graduated from Palmyra High School, Palmyra, Missouri in 1977. The friends who were with him when he broke his leg jumping from the barn hayloft and had to be driven to the hospital in the local funeral home's hearse, remained friends through-out his life. The hearse ride may have inspired a 7 year career as a funeral director. His fascination with planes led him to a decades long career as a jet mechanic with Merlin Express and then Continental/United. It wasn't only on planes that he plied that trade. Brooke, his daughter, had entered a wheelchair race. Her motor was transformed into a high performance racing dream by Kent. It was so souped up that she could only turn in very fast circles. He was an incredible, loving father. Kent and his family opened their hearts and homes to many. Great food, laughter and a willingness to adventure were hallmarks of the Lehenbauer home. When the family decided to meet for a few days of bicycling on the Katy Trail, Kent rode the entire route. Last fall, he shared his electric bikes with the young neighbors in the campground. For not only did he enjoy life, he loved helping others enjoy it. His storytelling, wicked, sharp sense of humor, his penchant for practical jokes, his 'we can do this” attitude and “we can do it together” will be sorely missed. Kent was preceded in death by his parents, his daughter, Brooke, a brother, John Lewis (Jay) Lehenbauer. Survivors include his wife, Cindy, siblings, Deana Lehenbauer Quinn (Paul), Nancy Lehenbauer Marshall (Rob), Sue Ann Lehenbauer Fansler (Gary), Jay's wife, Bonita Watters Lehenbauer, and Michael Brent Lehenbauer, Father-in-law, Gale Courtney. Kent's numerous nieces and nephews hold him in a special place. He paid attention and made it clear that he loved them. A memorial will be planned for family and friends when it is safe to gather. Memorial contributions can be made to Shriners Hospital for Crippled Children. You are invited to leave a written condolence on our website at www.shmfh.com.

The family of Daniel Kent Lehenbauer created this Life Tributes page to make it easy to share your memories.

Send flowers to the Lehenbauer family.