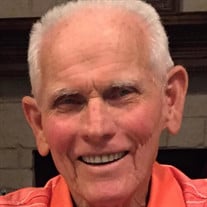 Wayne Robinson, 85, of Montgomery, Texas, passed away on June 23, 2021 at his home surrounded by his loved ones. Wayne was born February 26, 1936 in Holdenville, Oklahoma to O. W. and Daisy Robinson. He attended school in the Fairview area and spent many happy years playing the sports he loved. There he forged lifelong friendships and attended regular reunions with his classmates in later years. He graduated from Holdenville High School in 1954. After graduation, Wayne enlisted in the United States Air Force and served between 1954-1958. His service was spent in Korea and at Otis Air Force base in Cape Cod, Massachusetts where he played baseball for the U.S. Air Force in the Cape Cod League. His fondest baseball memory was in the Spring of 1958 when he tried out for the Boston Red Sox and received a “Way to Go, Kid!” from Ted Williams after he hit a ball over the Green Monster at Fenway Park. After his service, Wayne returned home to attend college in Arkansas City, Kansas where he met his wife, Jannine Mackey. They were married August 23, 1959 in Burden, Kansas. They were happily married nearly 62 years. He graduated from Oklahoma State University in 1962 and began a 31-year career with Southwestern Bell Telephone Company and AT&T. This led to many moves in the early years, but most of his career was spent in Houston, Texas, where he became Area Manager of Operator Services. In later years, he was involved in contract negotiations in the New Jersey and Washington, D. C. areas. Upon retirement in 1993, Wayne and Jannine built their forever home in Bentwater in Montgomery, Texas. Wayne spent his retirement playing golf, traveling, and enjoying his growing family. Wayne is lovingly remembered and deeply missed by his wife Jannine of Montgomery, TX; children Dana (Brian) Dames of St. Louis, MO; Kurt (Molly) Robinson of Katy, TX; Renee (Sean) Phillips of Lewisville, TX; grandchildren Nicholas (Lindsy) Phillips, Marin (Percy) Hudson, Grant (Lauren) Robinson, Joseph Robinson, Caroline Dames, Olivia Dames, Jake Dames; great-grandchildren, Knox, Lauren, and William, and nieces and nephews. He is preceded in death by his parents O. W. and Daisy Robinson, and sisters Patsy and Millie. A memorial service will be held Saturday, June 26, 2021, at First United Methodist Church in Willis, Texas, at 2:00 p.m. in the historic sanctuary. Interment will be a family service in Burden, Kansas, in the following days.

Wayne Robinson, 85, of Montgomery, Texas, passed away on June 23, 2021 at his home surrounded by his loved ones. Wayne was born February 26, 1936 in Holdenville, Oklahoma to O. W. and Daisy Robinson. He attended school in the Fairview area... View Obituary & Service Information

The family of Clovis Wayne Robinson created this Life Tributes page to make it easy to share your memories.

Wayne Robinson, 85, of Montgomery, Texas, passed away on June...

Send flowers to the Robinson family.