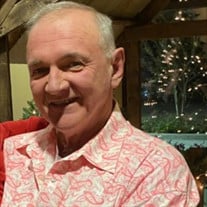 CHARLES DOUGLAS JONES, 63, passed away on Monday, January 4th, 2021 at his home in Conroe, Texas. Doug was born on July 14, 1957 in Conroe, Texas. Doug grew up in Grangerland, Texas and attended high school at Conroe High, graduating in 1975. Doug married his beautiful wife, Mona in 1976 and together they have three children and five grandchildren. Doug worked for Gulf States Utility in 1977 and left Gulf States in 1991 to start his career in the auto industry. He worked for Max Mahaffey Ford (later Gullo Ford) from 1991 until his passing. Doug was well known around Conroe as a community staple at the “Ford Dealership”. He has many friends who would consistently stop by his office to “shoot the bull”. Doug had a passion for many things. He loved sports and was a standout baseball and softball player. Mona and Doug spent many weekends traveling and playing in softball tournaments in their 20’s and 30’s. After his playing days were finally over, Doug could always tell you how his Astros or Texans were doing. I think you could count on one hand how many games he missed over the last few years. Along with sports, Doug was an avid outdoorsman. Hunting, working cows, snow skiing and being in the outdoors were some of Doug’s passions. However, Doug had one think that he made his number 1 priority, his kids and grandkids. Nothing brought Doug more joy than having his grandkids around and spoiling them with whatever they wanted. He was a natural Poppy and lived his life to make his grandchildren happy. Doug and Mona were happily married for 44 years. He adored her as a wife, mother, and grandmother. They enjoyed spending time as a family, being outdoors, and camping together. Doug is preceded in death by his father, LC Jones, mother, Barbara Ruth Jones, and brother Leonard Wayne Jones. He is survived by his wife, Mona Sue Jones (Nichols), children, Luke Jones, Lundy Stuart and husband Rusty Stuart, Logan Jones and wife Callie Jones. He is also survived by his 5 beloved grandchildren, Macie Jones (18), Claire Stuart (8), Caroline Stuart (5), Kirby Douglas Stuart (1), and Cru Jones (5 months), as well as, his mother-in-law, Frances Merlene Nichols. A visitation will be held on Friday, January 8th, 2021 from 5-7 pm at Sam Houston Memorial Funeral Home in Montgomery, Texas. Funeral services will be held on Saturday, January 9th, 2021 at 10:00 am at Sam Houston Memorial Funeral Home in Montgomery, Texas. You may leave written memorial condolences at www.shmfh.com.

The family of Charles Douglas Jones created this Life Tributes page to make it easy to share your memories.