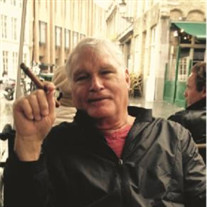 Charles Card, (Charlie,) loving husband, father, grandfather, brother and friend, died Saturday, January 16th, after a courageous battle with cancer at the age of 74. Charlie was born on October 19, 1946 to Daisy Pauline and Henry Card of Tuscaloosa, Alabama. He was raised in Galveston and graduated from Ball High School where he played football. He then went on to attend Sam Houston State University in Huntsville, and later went on to serve in the US Marine Corp. Charlie is lovingly survived by his wife of almost 38 years, Ann Neath Card, his daughter Lindsey Card McElligott and husband Patrick, his son, Christopher Garrett Card, grandchildren, Olivia Ann and Paige Elizabeth McElligott, brother, James Card and wife Kim, sister, Joyce Pierson and husband Raymond, as well as many nieces and nephews. His many joys in life included his granddaughters, the game of golf, as well as a daily morning breakfast with Steve Montgomery, his longtime business partner at Bowtex Company. It would be hard to remember Charlie, “CC,” as his granddaughters affectionately called him, without immediately thinking of his lifelong devotion to his family, both immediate and extended. He took great pride in his role as devoted son-in-law to Beverly Haltom. The simple joy of spending afternoons playing in the pool with his granddaughters were amongst his happiest days. On the weekends you could most often find him on the golf course with good friends as well as his son-in-law, Patrick, who affectionally nicknamed him, “Par-lie.” A cigar and good scotch were never far behind. Perhaps most indicative of the way that Charlie lived his life, was the manner in which he battled a most trying illness. He never complained, he thought primarily of his loved ones whom it affected, and never wanted to be a burden. He left this earth just as he lived his life; with a quiet dignity and subtle acceptance of those things we cannot control. His final moments were spent in full embrace of the return of all the love he so selflessly gave throughout his life. Charlie received loving care in his final days from Trinity Hospice, especially from Ansu, Marcia, and Norma. The family would also like to thank John Collier of Caring Friends Inc. for his loving final prayers with Charlie at home with his family. In lieu of flowers, contributions in Charlie’s memory can be made to Caring Friends Incorporated, www.caringfriendsindeed.com In grief, there is comfort in the lessons and gifts he gave us throughout his time on earth. “Joyous is the celebration in the Lords’ house when one so loved is welcomed home.”

The family of Charles "Charlie" Card created this Life Tributes page to make it easy to share your memories.

Send flowers to the Card family.