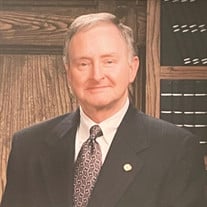 Dr. Bobby Kees Marks passed away on Sunday, March 7, 2021, at the age of 86. He passed peacefully at his home in Huntsville, Texas. He was preceded in death by his parents, Frank A. Marks, Jr. and Alma Lucille Kees Marks. He is survived by his wife of 64 years, Colleen Ann McDonald Marks, daughters Denice Leanne Marks Crosby and husband Daniel, Donna Deanne Marks Laverell and husband Les, grandchildren Kimberly Ann Hall Richer and husband Corey, James Aaron Hall, and great-grandson Finnick Angus Richer, as well as extended family to include Jade Marie Laverell Deal and husband Shane, and their children Theodore and Rose. Bob and Colleen met during the first week of their freshman year in college and dated their four years of undergraduate studies, becoming engaged during the last year. They married the summer after graduating from Lamar University in 1956. After growing up in Beaumont, Texas, Bob graduated with his BBA from Lamar University. He furthered his education by obtaining his MBA from the University of North Texas and later attained his Ph.D. from the University of Arkansas, graduating Beta Gamma Sigma. Dr. Marks served in the U.S. Army. After completing basic training at Fort Carson, Colorado, he attended the Army Administration School at Fort Chaffee, Arkansas. He remained as a Cadre at Fort Chaffee until going overseas to France in Headquarters Company, Petroleum Distribution Command, serving first in Orleans and then in Fontainebleau, France. Bob and Colleen Marks were Charter members of Elkins Lake Baptist Church, where Bob taught various Bible Study classes, as well as served as Deacon, Trustee and chair of various committees. He also served on the Board of Directors of First National Bank South, American Bank, the Economic Development Corporation, the Walker County Industrial Development Corporation, and the City of Huntsville Planning Commission. As an active member of the Rotary Club for many years, he held various offices and was a Paul Harris Fellow. He also served as president of the Huntsville High School Band Boosters. Dr. Marks served as Chairman of the Board of Directors for the Huntsville/Walker County Chamber of Commerce, receiving “Outstanding Member Award” and was also the first recipient of the “Mance Park Lifetime Achievement Award.” He also chaired the Founding Board of Directors for the Huntsville Leadership Institute. In addition to serving the community, Dr. Marks held several state and national offices, among which were Chairman of the Board of Directors for the Texas International Education Consortium, President of Chief Academic Officers of the Southern States, served on the Executive Committee of the Renaissance Group, and on the Board of Directors of the Association of Texas Colleges and Universities. Dr. Marks’ 41-year career with Sam Houston State University began in 1960 as an instructor of Business Administration. He later served as Dean of the College of Business Administration for 15 years, as Vice President for Academic Affairs for 11 years, and retired in September 2001 after serving six years as President of the university. Dr. Marks’ presidency stressed Student retention, internationalization of the curriculum, application of technology to instructional programs, and fund raising. Upon retirement, the Board of Regents awarded Dr. Marks the title of “President Emeritus” and named the Administration Building the "Bobby K. Marks Administration Building." Additionally, the City of Huntsville named a street which runs through the university campus, "Bobby K. Marks Dr." Bob will be remembered as a loving husband and father who enjoyed skeet shooting, fly fishing, spending time outdoors and traveling with his wife and family. Services will be held on Friday, March 12th at 11:00am and are private for family only. All others may view the live stream at the following link: https://www.facebook.com/elkinslakebaptistchurch/ In lieu of flowers, memorial contributions may be made to Elkins Lake Baptist Church, 206 SH 19, Huntsville, Texas 77340, https://secure.subsplash.com/ui/access/3BCJGZ or to the Bobby Kees and Colleen Ann Marks Presidential Endowed Scholarship, Sam Houston State University, PO Box 2537, Huntsville, Texas 77341. https://www.tributeslides.com/tributes/show/MPJQQH34LLHNT3PB

Dr. Bobby Kees Marks passed away on Sunday, March 7, 2021, at the age of 86. He passed peacefully at his home in Huntsville, Texas. He was preceded in death by his parents, Frank A. Marks, Jr. and Alma Lucille Kees Marks. He is survived... View Obituary & Service Information

The family of Dr. Bobby Kees Marks created this Life Tributes page to make it easy to share your memories.