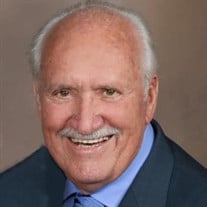 Bobby Cantrell was born in Waco, Texas on August 19, 1939 and passed away at his home on September 16, 2020. Bobby graduated from Sam Houston High School in Houston, Texas and studied architectural design at the University of Houston. Bobby was a faithful member of his community and church and a friend to everyone he met. The first part of Bobby’s life was difficult and at the age of 7 he went to live with his oldest brother. It was from this brother, who he called Papa Joe, that he learned the skill of trim carpentry. At 20 years old Bobby married the love of his life, Linda, and together they raised a family and built a home construction business. In 1964, while living in Houston, Bobby began working as a trim carpenter in Conroe. In 1966, Bobby and Linda moved to Conroe and became an integral part in the city’s growth. Eventually, Bobby expanded his business to also include commercial construction. Through the years he was in business with Joe Cantrell, DJ Boman, Steve Kasmiersky, and Toby Powell. In 1986, Bobby was elected President of the Montgomery County Builder’s Association. Bobby loved Conroe and believed in giving back to the community. One way he did this was by serving on the Conroe Chamber of Commerce board of directors. Bobby enjoyed being a part of the Conroe Noon Lions Club which he joined in 1973 and served as President from 1986-1987. He also blocked off noon on Wednesdays so he could attend the weekly meetings and he received perfect attendance awards for many years. Bobby was awarded Lion of the Year in 1989 and received the Melvin Jones award in 2008. Another way in which Bobby gave back to the community was by serving on the Conroe City Council. He was appointed by Mayor Moore in 1993 and won election to the seat in 1994. In 2015, Bobby and Linda’s home of 38 years, which was located next to Candy Cane Park, was purchased by Conroe and is currently the City of Conroe Park and Recreation offices. Bobby was an active member at West Conroe Baptist Church, which he joined in 1986. He and Linda served as Sunday School directors for several years and Bobby served as a deacon but was inactive the last few years. Bobby was able to use his talent in the construction field by serving on the building committee and helping the church campus grow. Bobby was passionate about helping others develop a relationship with Jesus, which led him to serve in the ministry of Bethlehem City. Each year he would oversee the fundraising auction as well as build new sets and be on hand each night to help the program run smoothly. He loved his pastor, Jay Gross, and enjoyed supporting his vision of Bethlehem City. Bobby’s motto was, “Whatever it takes.” This was reflected in his giving 100% to whatever task was before him, both big and small. Bobby would always have a roll of $2 bills in his pocket, which he would hand out with a smile. He loved giving them to people who showed his whatever it takes philosophy by going above what was needed, or by serving others well or to someone who looked like they needed a reason to smile. His family was blessed by his servant’s heart and they always knew they were loved. Bobby is survived by his wife of 62 years, Linda Cantrell. Daughter and son-in-law, Jan and Sam Lund of Conroe. Son and daughter in-law Tim and Jenny Cantrell of Conroe. Grandchildren Ryan and Jess Cantrell of Magnolia, Lisa and Griffin Covington of Sugar Land, Chase Cantrell of Conroe, Nathan and Katy Lund of Willis, Phillip and Sarah Lund of The Woodlands and Hunter Davis of Conroe. Great grandchildren Andy Cantrell, Cora Covington, Collins Cantrell, Wyatt Lund, Miles Covington, and Lauren Lund. He is preceded in death by his grandson Kasey Davis. Pallbearers include sons Tim Cantrell and Sam Lund, grandsons Ryan Cantrell, Chase Cantrell, Nathan Lund, Phillip Lund, Hunter Davis, and Griffin Covington. Honorary pallbearers are Mike Tims, Lee Hollingsworth, James Lindsey, and Freddie Cantrell. In lieu of flowers, the family asks that donations be made to the West Conroe Baptist Church Building Fund or Bethlehem City. His family would like to thank the men and women of the Conroe Police, Fire and EMS Departments for their care and concern, which was given to Bobby and his family on the night of his passing. Also, Bobby’s family would like to thank the many friends and family who have been so loving and supportive during this difficult time. A Visitation will be held at West Conroe Baptist Church on Monday, September 21, 2020 from 9:00 AM -10:30 AM with the Funeral Service beginning at 10:30 AM. A Graveside Service will be held at 3:30 PM at Weches Community Cemetery in Weches, Texas. You may leave condolences for the family by visiting www.shmfh.com.

Bobby Cantrell was born in Waco, Texas on August 19, 1939 and passed away at his home on September 16, 2020. Bobby graduated from Sam Houston High School in Houston, Texas and studied architectural design at the University of Houston. Bobby... View Obituary & Service Information

The family of Bobby Wayne Cantrell created this Life Tributes page to make it easy to share your memories.

Send flowers to the Cantrell family.