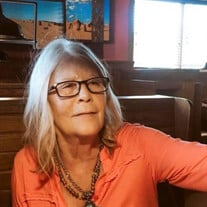 Our dearest Mother, on the 31st of October 2020 at 8:33 a.m. you started your heavenly ascent from St Lukes Hospital in the Woodlands, TX. God blessed us with her birth on the 18th of November at 3:05 am at The Robberson Shirley Hospital in Wynnewood, OK, to Parents Tommie and Corrine Bishop. She was born a beautiful blonde haired girl, the oldest of five, with four brothers, Tommy, James, Gary, and Lawrence. During her youth the family moved often throughout Oklahoma, Texas, and Arizona leading her to attend many schools, sometimes less than a full school year. She dropped out after the eighth grade but would years later obtain her GED and attend Lamar University. During her youth she enjoyed holiday church services, and harvesting crops from her Grandparents garden such as tomatoes, okra, corn, garlic, onions, green beans, squash, watermelon, walnuts, pecans, and cotton. Her first paying job was with Texas Printing Company and though she was employed priorly at the Dairy Twist where she was paid in Hamburgers. In September 1967 she wed Thomas Wiedman and they soon had two children, Tonya born November 1968, and Tony born September 1971. Tom and Betty would later divorce in 1976. Shortly after through mutual friends she met John Surowiec whom she would wed in July 1978. A little over a year later, she gave birth to her and John’s son Michael in November 1979. They lived in modest house in Beaumont where Betty worked in a clerical position and John in a refinery. After countless floods, and one house fire, they moved to Lumberton, TX in 1991. During those times she went to college, sold furniture locally, and then went on road for liquidation sales. There were many grandchildren born during the Lumberton years, Austin Reyes, Jackson Burchfield, Aron Cisneros, Perry Burchfield, Addison Cisneros, Lane Gill and Francesca Thomasee. There were also many losses during those times. Frank Wiedman, Tommy Jack Burchfield, Marshall Grimes, Steve Warren, John Surowiec Sr, Ruth Grimes, Maxine Surowiec, John Surowiec Jr, and Lico Cisneros. She spent many years as the caretaker for so many others that it had become second nature. Our once abundant family had been whittled down little by little and it took an emotional toll upon her. In November 2017 she made a choice to try to move closer to her family that she had left upon this earth and picked out a house for herself for the very first time in her lifetime. She did well at first but would later succumb to the depression that she had been battling her whole life. After being hospitalized twice within a month in July 2019 she decided that she needed to move into a place where her and children could reside together and help one another through the process of her passing this earth. Betty was diagnosed with Systemic and Discoid Lupus about 38 years ago. She had every auto immune disorder associated with it or just in general. She powered through the years like a true champion having some good days and some equally bad days. The lupus battle was not easy. In late August of this year just 2 short months ago Mom was diagnosed with stage 4 lung and brain cancer. After her diagnosis we thought we would have more time with her after they started treatments, unfortunately she was unable to complete radiation or chemo in any form. God did not want her to suffer like she feared she would have too and endure the illness. She spent her last days with her son Michael, listening to him read, watching reruns, eating bacon, eggs, toast, sherbet, rocky road, while drinking as much apple juice the Dr would allow. In the end, she conquered her greatest weakness that she had on this earth, smoking cigarettes. Sometimes we tend to overlook somethings as miraculous, but for her to quit after roughly 55 years was nothing short of a miracle. It gave us a very little extra time, but she was nothing short of grateful for it. Betty Surowiec was survived by brothers Tommy Bishop, Gary Bishop, and LD Grimes. Her children Tonya Arceneaux, Tony Wiedman, Shawn Gill, Heather Schindlewolf, and Michael Surowiec. Grandchildren Austin Reyes, Jackson Burchfield, Aron Cisneros, Perry Burchfield, Addison Cisneros, Lane Gill, Francesca Thomasee, Ethan Payne, and Luxleigh Locke. Great grandchildren Kinley, Aspen, Oakley, and Braxton Reyes. Visitation will be held Thursday, November 5, 2020 from 12-1pm in the chapel at Sam Houston Memorial Funeral Home in Willis. A Memorial Service will follow at 1pm at Sam Houston Memorial Funeral Home. You are invited to leave a written condolence on our webpage at www.shmfh.com.

Our dearest Mother, on the 31st of October 2020 at 8:33 a.m. you started your heavenly ascent from St Lukes Hospital in the Woodlands, TX. God blessed us with her birth on the 18th of November at 3:05 am at The Robberson Shirley Hospital in... View Obituary & Service Information

The family of Betty Ruth Surowiec created this Life Tributes page to make it easy to share your memories.

Send flowers to the Surowiec family.