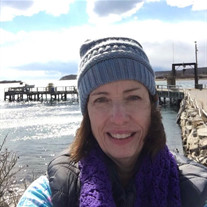 Barbara Jones-servant of Jesus Christ, wife, mother, daughter, sister, aunt, friend, nurse, all 110%-died in a car accident on July 15, 2021. Barbara Lucy Jones (née Duffy) was born in 1967 in Washington, D.C., where she loved visiting monuments and Smithsonian museums. With her parents and siblings, she boarded the Amtrak Auto Train in University Park, Maryland, in 1979 and arrived in Cocoa Beach, Florida. There, she embraced the "salt life," coming of age on the sleepy Banana River with manatees, dolphins, white pelicans, orange trees, and Space Shuttle launches. She moved on to the University of Florida, never missing a chance to shout, "Go Gators!" or wear orange and blue, the brighter the better. In her first job out of college in Charleston, South Carolina, Barbara met her soulmate, Greg, and the pair was engaged a month later. Folks doubted a whirlwind romance between a young sailor and his bride would last, but Barbara and Greg knew better. They were devoted to each other and their family for the next 31 years. In those decades, she adopted his home state as her home state. Nearly all gifts she mailed to her Florida family had something to do with Texas, most in the shape of the Lone Star State. Barbara was the oldest of six children. As expected from this birth order, she was a "little mother" to her siblings and continued a deeply nurturing role throughout her life. She scanned every room she entered to assess needs of others. Without asking, she might gently place a blanket on your shoulders (how did she know you were cold?) or a lay a cold glass of water next to you (how did she know you were thirsty?). Her visits always began with her pulling treats out of her bag, each one carefully selected for the recipient. A working mother raising four children, she found time to wrap and mail eight individual presents for her Jewish nephews for Hanukkah, even when the boys were no longer children. When it came to gifts-or "little happy's" as she called them-Barbara understood no budget. Her selfless and thoughtful acts were daily. That Barbara became a nurse and healer is no wonder. While most slept at night, she worked the nightshift. While most worked for a business, she worked inside the state prison. While most saw criminals, she saw humanity. More recently, she worked in the prison's COVID-19 ward without fear, complaint, or need for accolades. She was a brave, unsung soldier. Barbara cherished being a wife and a mother, and her happiest moments were anytime she was with her family, whether donning over-the-top purple Angleton Wildcat gear or driving long stretches across four states for mere one-day events. While Barbara is now with her dad, Raymond Duffy, and her baby boy, Christopher, she leaves devastated her husband and best friend, Greg; her son, Thomas, who found his biggest cheerleader in his mom when he played football and continuing to now; and her daughters Rebecca (Jeff Dean), Emily, and Hannah Jones, who each inherited her gentle but giant heart. Barbara also leaves to mourn hundreds whose lives she touched deeply, including her grandsons Garrett and Cash Dean; her mother, Barbara Hortsing; her brothers John, Michael, and Frank Duffy; her sisters Mary Dollar (Craig) and Patty Barksdale (David); her in-laws Bunny Nelson (Homer), Tommy Jones (Charm), and Roland (Sarah), Crystal, and Jessica Nelson; her adopted aunts Becky Pruet and Gayle "Sissy" Browning; and many other adoring nieces, nephews, and family members. We are flawed, but in us Barbara focused on our good. Barbara was a member of the Northside Baptist Church in Huntsville. Because she grew up Catholic, Greg teased that she was "Batholic." No designation is needed; she was simply a humble servant of Jesus Christ, with a deep faith evident in what she said and did. Words cannot convey the goodness of Barbara, but Matthew 25:31-40 comes closest. At the end, when her life was unexpectedly cut short, she undoubtedly could look back and know she had lived her life on earth as a sheep on the right. Just hours before she died, Barbara prophetically left co-workers with this verse from 2 Timothy 4:7: "I have fought the good fight, I have finished the race, I have kept the faith." A celebration of Barbara's life will be on Saturday, July 24, at Northside Baptist Church, 1207 FM 980, Huntsville, TX 77320. Visitation begins at 10:00, followed by service at 11:00, with Senior Pastor Reagan Cooksey officiating. In lieu of flowers, a donation can be made to CASA of Walker, San Jacinto & Trinity Counties, where Barbara brought her bag of happy's to the children there (1300 11th Street, Suite 310, Huntsville, TX 77340) or, to continue her servitude on earth, an unannounced act of selfless kindness can be done for someone who needs it. Memorial condolences to the family may be made at www.shmfh.com.

The family of Barbara Lucy Jones created this Life Tributes page to make it easy to share your memories.