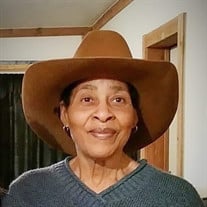 Mrs. Barbara JoAnn Green, a 79-year old resident of Willis, Texas for 8 years…passed peacefully in her sleep Saturday morning, November 14th in Conroe, Texas after a lengthy illness. Born June 6th, 1941 in Houston, Texas to Frank & Zerlene Jackson, “Barbara Jo Jackson” would later change her middle name to “Joann” because she believed her parents gave her that middle name because they wanted a boy so badly. Barbara was the third and middle child of five girls. A tomboy by nature who loved the outdoors. She cherished animals, loved to fish, was a nurturer of all types of plants, and was a prolific seamstress. “A city girl born with a country heart”, as Shelton Green, Sr., her husband would later boast. Barbara was baptized at an early age while a member of the 5th Ward Church of Christ in Houston. A faithful worshipper who taught Sunday school and Vacation Bible School. On January 12th, 1962, Barbara married Shelton Green, and he too was baptized and became a member of Fifth Ward Church of Christ. Barbara and Shelton moved to Teague, Texas in March of 1978 and placed membership in the Teague Church of Christ. Moving to Carencro, Louisiana in the early nineties, they were members of Northside Church of Christ in Opelousas and South College Road Church of Christ in Lafayette, LA. The couple later moved to Kemp, Texas where they were members of the Churches of Christ in Mabank, Texas. Their current membership is at the Willis Church of Christ in Willis, Texas. Barbara attended business school in Houston, after graduating from Kashmere High School. She later worked in the Harris County Juvenile Probation Center. Creative, elegant, classy, humble, sweet, meek and industrious. Barbara is survived by her husband of 58-years, Shelton Green, Sr. of Willis, Texas. Shelton Green, Jr. of Austin, Texas. Jeffery Berlin Green and his wife Nicole Green, both of whom reside in Berlin, Germany. Stacey Dawn Green of Dallas, Texas. Simeon Joseph Green of Houston, Texas, and her youngest, Ireland Alfred of Willis, Texas and two grandchildren, 10-year old Yancey Alford of Willis and 4-year old Yanae Alford, also of Willis, Texas. She is also survived by sisters, Dorothy Anderson, Diane Muckelroy, and Patsy Harper, all of Houston, TX. Barbara was preceded in death by parents, Frank and Zerlene Jackson, and sister Frankie Donahoe. Due to the Covid pandemic, the family is holding a small, private-ceremony for family members only in Willis, Texas on Thursday, November 19th.

The family of Barbara Joann Green created this Life Tributes page to make it easy to share your memories.

Send flowers to the Green family.