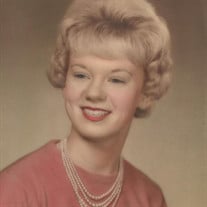 Mrs. Barbara Gleason (Ackerman), of Conroe, Texas, passed away at the age of 77 on Friday, December 11, 2020. Barbara was born in Wellsville, NY on March 26, 1943, to Philip and Gladys Ackerman. Barbara spent most of her life in service to others. Prior to marrying her childhood sweetheart in June of 1964, Barbara worked in a dentist office assisting with patient care and then later in a support position at Wellsville Memorial Hospital. She also helped her mother and uncle in their Singer Sewing Machine store in Wellsville N.Y., making curtains and draperies for customers. After marriage, she devoted her time to raising and caring for her two sons where she was a consistent and constant supporter of all of their various activities. Barbara was a team mom for baseball, a den mother for boy scouts, a Sunday School teacher and in 1976 completed a certification program in Corning N.Y. so that she could help teachers with special needs children in their classrooms, which she very much enjoyed doing. After moving to Houston, Tx. in 1980, Barbara continued in her service to others, working for many years at an elderly care facility. After retirement, Barbara and her husband Dave parted with most of their worldly goods and spent 3 years roaming and exploring the lower 48 states. In 2003, they settled in Conroe, Texas and became active members of The Vineyard Church of Conroe. Barbara was a very creative and talented person who loved to do crafts, sew and engage in various art projects. She was often quiet, unassuming, and sometimes shy, but she cared very deeply for her family and friends and had a unique depth of wisdom that will be sorely missed. Barbara was preceded in death by her husband David, her father Philip, her mother Gladys and her sister Norma, all of Wellsville NY. Those left to cherish her memory include her two sons David (Wanda) Gleason of Conroe TX, and Matthew (Kim) Gleason of Spring, TX; brother Richard Ackerman of Humble TX; grandchildren Alexander Gleason of Houston TX, Nicole Gleason of Spring TX, Kenneth Gleason of Houston TX, Michael Gleason of Houston TX; nieces and nephews Jolene (Kennon) Ackerman, Jaclyn Ackerman, Daniel (Sharon) Keib, Kandra (Kevin) Garwood, Robin (Gary) Ahrens, Sean (Sandy) Moran, Tammy (Robert) Christman, Kelly (Jesse) Case, and a host of devoted family and friends. Funeral Services will be held on Sunday, December 20, 2020 at 2:00 PM at Sam Houston Memorial Funeral Home in Willis, TX, with viewing beginning at 1:00 PM. Condolences may be left at www.shmfh.com.

Mrs. Barbara Gleason (Ackerman), of Conroe, Texas, passed away at the age of 77 on Friday, December 11, 2020. Barbara was born in Wellsville, NY on March 26, 1943, to Philip and Gladys Ackerman. Barbara spent most of her life in service to others.... View Obituary & Service Information

The family of Barbara Ellen Gleason created this Life Tributes page to make it easy to share your memories.

Send flowers to the Gleason family.